Or, Love Banner…po-tay-to po-tah-to. In keeping with my chocolate Valentine’s theme, I made a new banner to go on my fireplace : 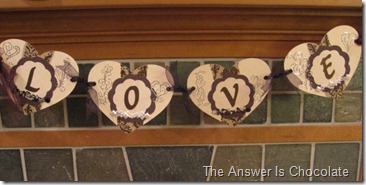 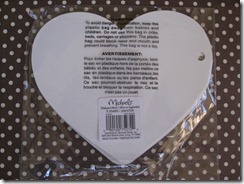 I covered four of the hearts with scrapbook paper : 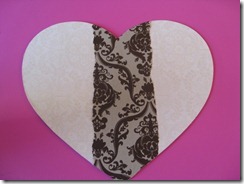 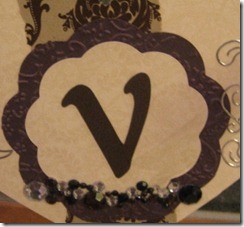 Cut the letters LOVE using the Jasmine alphabet cart and put those in the center of each heart. Never content to leave things simple , I added silver foil stickers (I’ve used Magenta peel offs before but these are from Elizabeth Craft Designs…I found these at Ben Franklin) and of course I had to add some bling so I added some rhinestone and pearlized self adhesive strips. 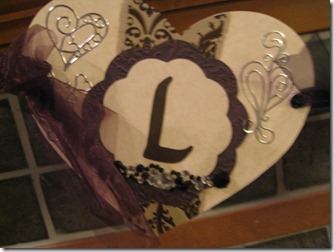 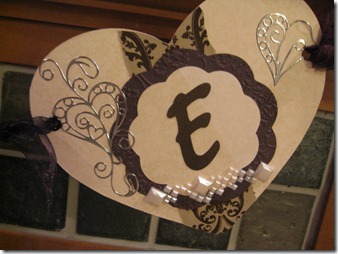 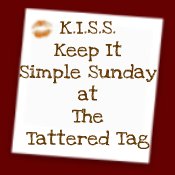 I mentioned in an earlier post that I had been contacted by CSN to review a product of my choice. I knew exactly what I wanted because it was something I’d been trying to justify over the holidays…a fondue set.  The decision was made when I saw the same one I’d been thinking about on cookware.com, one of CSN’s stores, for less than I’d seen it anywhere else. A. Lot. Less. So with the amount they provided , paying the difference was a no brainer. It arrived within three days of ordering.

I love the bite size nature of fondue. I’m not so much into actually cooking things using this method ( the broth or oil) but for appetizers or dessert? YUM!
You can probably guess that my inaugural use involved chocolate! Here’s the fondue set I chose:

Cuisinart’s electric fondue set. I didn’t want to deal with making sure I had Sterno and wanted to control the temperature so I went w/ electric. No fondue when the power’s out! 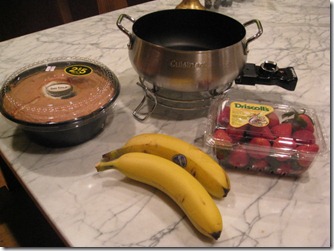 I went with a sour cream angel food cake, bananas and strawberries as our selection. 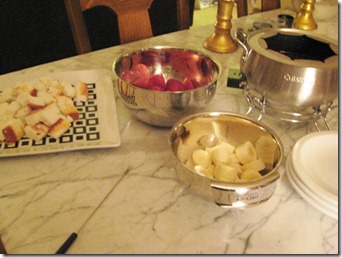 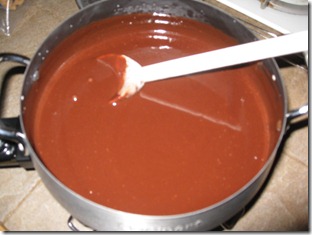 Used a basic chocolate fondue recipe which I didn’t measure.
Bring the cream to a low simmer, add the chocolate, stir until smooth , add vanilla. The instructions said to keep the fondue on a low temp while serving but I disconnected it to serve it which worked fine. If you’re going to have it out for a while ( not the case in my house…didn’t stand a chance) then I can see leaving it plugged in! 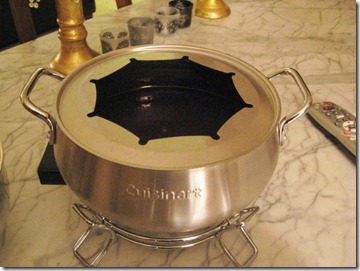 It was hard to get pics while doing the prep, cooking, and serving and once on the table, forget it. My husband and son were telling me “put the camera down now” so we could dig in! And we did. And ate all the evidence.
I am planning on using this for Valentine’s Day but I had to practice right? I think I’ll have to practice again. Just to be sure.
Posted by Carol, The Answer Is Chocolate at Monday, January 31, 2011 13 comments:

What an Honor and a Treat!

I opened my email this morning to find a note from my friend Cindy Adkins telling me she'd featured me in her new online magazine Whimsical Musings Magazine! 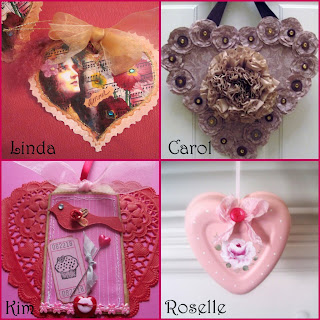 If you aren't already familiar with Cindy's blog Cindy Adkins Whimsical Musings, then you should be! Her creations are works of art, every single one of them, and I'm convinced she never sleeps. Between working as a journalist, creating art, running her blog, Etsy store new online magazine, how could she?

If you want a visual treat ( no calories so that should balance out all the chocolate temptations I post) definitely go visit Cindy here:

Thank you so much Cindy! I am so honored.
Posted by Carol, The Answer Is Chocolate at Sunday, January 30, 2011 14 comments:

I’m back to working on Valentine’s cards and still keeping with my neutral chocolate inspired theme. This batch, I used my Cricut Expression, specifically the "Lovestruck” cart.

We have a regional chain of stores called Paper Zone and they are my go to place for all of my cardstock and envelopes, but they carry a great line of scrapbooking supplies, specialty papers etc. I fell in love with Making Memories Paper Reverie line because it was exactly my color scheme. Look at this fun tape: 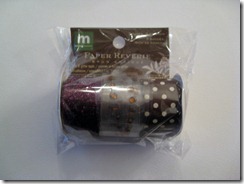 I also found these strips of adhesive pearls at Michaels: 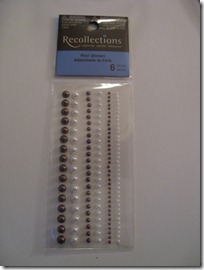 And this reversible paper from the Reverie collection mentioned above: 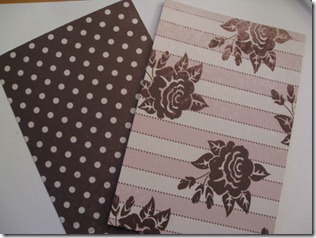 I cut out two different hearts using my Cricut. With the Lovestruck cart you can cut a detailed heart plus a solid one to put behind it . Here’s one of the cards: 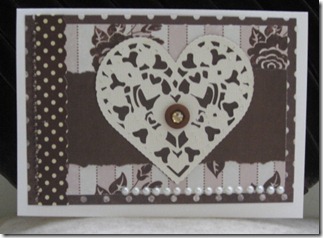 I cut the detailed heart from cream C’Oredinations paper and the solid heart from a chocolate brown paper. I used the brown polka dotted tape on the left side along with a strip of the brown pearls and finished with a button and adhesive rhinestone in the middle. 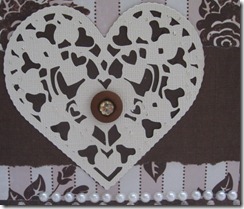 For another card, I did the reverse color combo on the hearts…brown detail with cream backing: 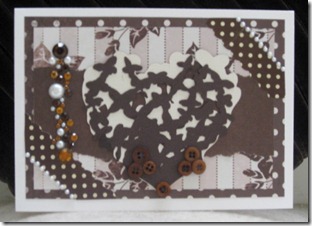 Embellished with the polka dot tape, brown buttons, pearls, and a strip of combo rhinestone and pearls. I need some chocolate!

Blog Feature Friday: The Life of Me

Whew! TGIF and you know what that means... it’s time for BFF: Blog Feature Friday !

This week I’d like to introduce you to a blog called:

and the blogger behind it, Sasha. Sasha is a busy young woman ( I could be her….older sister let’s say!) who not only has a fun blog, but a custom scrapbook business, is an independent Memory Works consultant, and she’s an avid photographer and a participant in  “365 Days: My Life Through Photographs”.

In addition to all of this, Sasha hosts a weekly link party on Mondays called:

where you can link up for anything DIY: Photography, Recipes, Sewing Projects, Crafts, Scrapbooking, Cards, Paper Crafts, etc., as well as:

where Sasha is paying it forward in the blogosphere by highlighting a blog each week that inspires her. Whew! Busy young lady!

If all of this isn’t ambitious enough , she’s also set a goal for herself to accomplish 101 things in 1001 days! 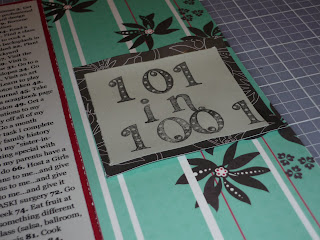 She’s got it organized in specific categories and is updating her list on her blog as she goes. I think this is a bold thing to do…putting it out there for all the world to see so good for you Sasha!

Happy Friday everyone and thanks for joining me for another BFF!
Posted by Carol, The Answer Is Chocolate at Thursday, January 27, 2011 2 comments:

Email ThisBlogThis!Share to TwitterShare to FacebookShare to Pinterest
Labels: BFF#7 The Life of Me

So I was scrolling through my blog reader and what to my wandering eyes should appear? This: 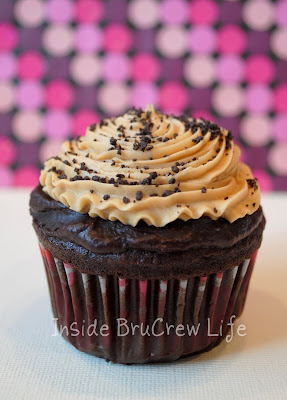 Uh-huh. I suffer, you suffer. Jocelyn from Inside BruCrew Life shared these today on her blog. Sorry, I ate all the samples! 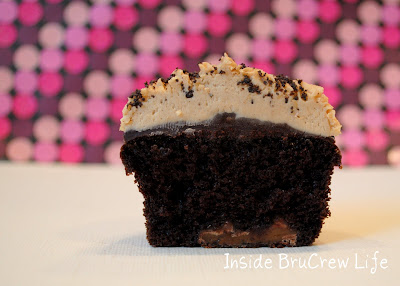 Posted by Carol, The Answer Is Chocolate at Wednesday, January 26, 2011 13 comments:

If you’re a wine drinker, you might be familiar with “Two Buck Chuck” which is a wine from Trader Joe’s. I’m not much of a wine drinker, but I love a good bargain. I love Dollar Tree, and the dollar section at Target, but my favorite of favorites is the dollar aisle at Michaels.  I epecially love it when they have things like “Moonlight Madness” coupons where you get 25% off EVERYTHING ( except clearance) so instead of $1 it’s $.75. Can’t beat that.

Here are some recent finds I haven’t yet made anything with but had to have since I can’t resist anything black and white: 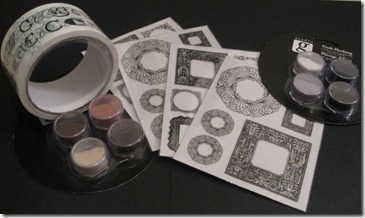 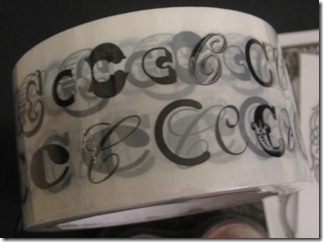 Monogramed Packing Tape…cards, collage, who knows?! They have a whole new monogram collection but I was good and just bought the tape. So far! 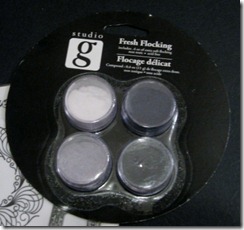 This is “flocking powder” which I haven’t played with before but for $.75… 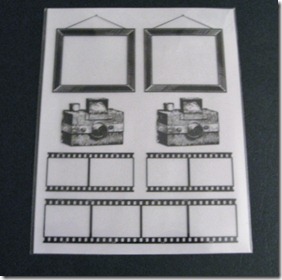 Rub ons! I love rub-ons , you can put them on everything. So of course I bought a bunch.

And look what I found at Dollar Tree: Posted by Carol, The Answer Is Chocolate at Wednesday, January 26, 2011 6 comments: