No Longer In Control

No, not of my mental faculties ( some would argue that point!). My “baby” turned 18 yesterday. Still in denial that this is possible. I certainly gave no consent for this to happen! But happen it did.

Those of you with younger kids, savor the days when you’re totally in control of the party plans and can actually plan a party! Those of you with adult children, I’m sure you’ll tell me that there will again be a time when you can plan. In the meantime….I’ve learned as the teen years have progressed that the friends take over the planning of the social events like birthdays. Not complaining, he has a fantastic group of friends.

Son actually didn’t want to do too much to celebrate this milestone birthday. He and all his friends are exhausted from doing college apps and getting through first semester finals which will be over next week. Teenagers (most) are also notoriously laid back and last minute about planning social things. But finally,late last week, I got a text from one of his closest friends that there were “plans” . She had arranged for a surprise dinner and coordinated all the details. What a sweetheart! I asked if there were after dinner plans and there weren’t so I offered to host a dessert gathering which was a win win, but it just left me yesterday to get things done while trying to keep this a surprise. So, I  whipped up  a birthday banner…that wasn’t something likely to cause suspicion.

Cut out the letters w/ my Cricut using balloon patterned paper and punched some stars out.

Big surprise that Son is a chocoholic like his parents. As soon as he left the house, baked a cake thanks to Bakerella. A chocolate cake with Reeses peanut butter cups in the cake and on top. YUM! 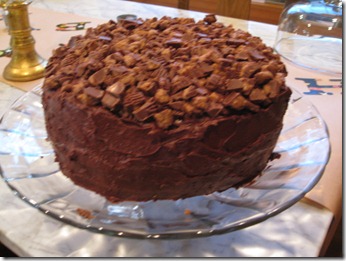 Bakerella’s cake had the sides covered w/ chopped peanut butter cups too but the top is enough let me tell you! 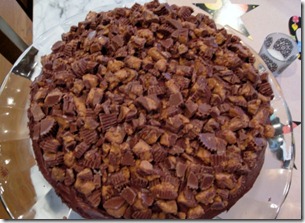 I also did a “build your own sundae” bar with ice cream, hot fudge, and assorted toppings. Since this all came together last minute, I used whatever I had on hand to decorate. I made a table runner out of brown kraft paper, and cut out HAPPY BIRTHDAY and the number 18 out of some more of the same paper I’d used for the banner. 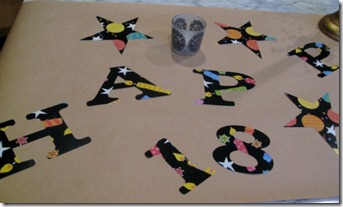 You can put colored pencils and people can scribble birthday messages. I of course forgot to do that! 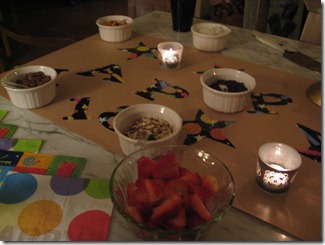 The surprise went off without a hitch and we survived 10 teens loaded up on sugar. Still haven’t come to grips with having an 18 year old!

Posted by Carol, The Answer Is Chocolate at Sunday, January 23, 2011

Am sure your dessert party was a hit and you got to share it with so many happy teenagers. Love all the goodies you made and that banner is so cool. Annette x

What a great party! Love the banner, and I'm drooling on my keyboard because of the cake pictures--thanks! ;) 18! Wow! Goes by fast huh?

Wow...18 years old. You handled it well, Mom! That cake looks to die for. I'm sure he enjoyed it. Great idea to have a dessert social at your place. Banner looks great too!

Oh boy, hope you saved me a piece of that cake...lol... your banner is lovely, sounds like a wonderful party, and don't worry, you're still in control of... his laundry. lol.

Carol I know of what you speak. I have two older kids (18 and 23) and at this point, they're both away at school, and i have ZERO control over ANYTHING they do. funny to be calling them kids even! know what i do to deal with this lack of control? Pray. That's all i got!

The banner looks fabulous. The cake looks delicious. The party sounds like a huge success.

OH that cake looks good...I am sure they had a great time! Time goes so quickly, doesn't it?

Noooo! I don't even want to think about the teenage years! Looks like a great party. And that cake! I am definitely going to have to try that recipe.

How lovely that they all came over for dessert. Mine wouldn't even let me do that.

My baby turned 18 last year (will be 19 in June), so I know how you feel. Fortunately for me...I've got grandsons to help fill the gap.