The Best Way To Learn Is To Do

at least that’s true for me. But sometimes, the only way for me to learn or do is when I have to. So on New Year’s Eve, my laptop decided to start giving me “Danger Will Robinson” failure warnings and I’ve been putting off getting a new one because there have been more important things to spend money on ( and it was DECEMBER!) but then it would have been just as silly to ignore and hope for the best and lose all my pics, files, etc., especially having started my blog. So off to Best Buy. Got a nice Toshiba for a decent price. Thought my next one was going to be a MAC but I’m leaving MAC world to my boys and will stay a Windows gal.

So I’ve had to remind myself how to do stuff and learn how to do other stuff and that’s not a bad thing. I’ve been playing w/ Live Writer and some of the other functions like the picture editing. I am waiting for my old friend PrintShop Deluxe to arrive in it’s current incarnation but I’ve been lost w/out being able to play with digital stuff which of course I have a sudden urge to do because I can’t! That’s so me. Have something and not use it and then itch to use it when you don’t. Patient, I’m not!

I’d  been seeing blog posts about words of the year which from what I gather are words that people have chosen that represent their family or their goals for the year. I liked this idea a lot and wanted to do something similar. I blogged earlier about this being a year of milestones for our family…our son’s 18th birthday, our 20th anniversary, our son’s HS graduation and we’ll learn what college we’ll be in debt to

and the word that kept coming back to me was “Discover” . It’s a word that has so many applications. Discovering what we’re made of; what we’re capable of; strength /talents / compassion we don’t know we have. Discovering what I call the “Dorothy Effect” as in Dorothy from The Wizard of Oz…sometimes we discover what we’re looking for is in our own back yard…you get it.

W/out my graphics program ( and not having alphabet stamps big enough to spell out the letters and being horrible at freehand letters) I made myself play with Picnik which I’ve used just a little. There are all kinds of things in it you can use for free (or you can upgrade to Premium) and you can really go to town. This is very basic but it achieved what I wanted with a fun font and a simple flourish. I was able to size it in Windows Live Photo Gallery and print it suitable for framing (my $.01 frame from Aaron Brothers who has their $.01 sale going on right now…buy one, get one for $.01) 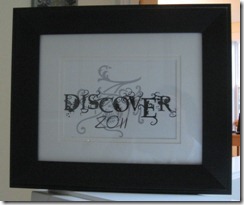 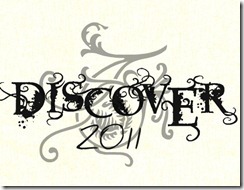 So, go forth and discover!
Linking Up At:

Posted by Carol, The Answer Is Chocolate at Wednesday, January 05, 2011

A very nice choice after all the milestones you had in 2010! I originally thought my word would be grace...learn to live in His grace and to react to all situations with grace, but lately I'm liking the word wonder too. I'll get back to you on that! lol

yes, agreed, a very nice choice of word. it's open and positive with a hint of risk. I like it!

Great choice--I love how you made something to remind yourself of your word choice. I think mine is Inspire. Thank you for sharing!

I love your word for the year and your artwork created for it...I have fun with Picnik, too!

I'm popping over from Cindy's place to say hello! Your word art is a great little project. I haven't played with any of the digital programs. Just not enough time for everything I would like to do. Best wishes to you, Tammy

Great choice for your word!

I love it! I like playing around with Picnik too...

Discover, that is a great word for 2011. Everyday lately seems to lead to more discovery me, you are right though, it is a good things. Especially once you get through it :)
I am definitely going to have to go get Picnik

You sound like you are definitely settling in the mode for your word of the year.

Great word. You have a busy year in store.

I need to try Live Writer and Piknik!