I didn't put this up earlier because I didn't want you know who to see it before he got it. But now that he's got it ( and likes it) here's what I made Mr. C. for Father's Day: 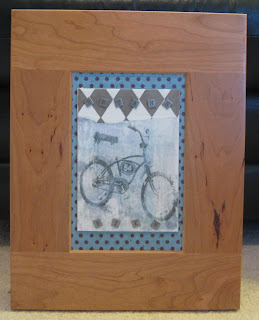 I'd been wanting to try out Sabby in Suburbia's photo transfer tutorial, and when my husband found a photo of a favorite childhood memory, his favorite bike, I thought it would make the perfect subject to use.  I've had this cabinet door I found on an excursion to a magical place called  Earthwise Architectural Salvage in Seattle, which I knew I wanted to use for a piece of wall art. Originally I thought I was going to do something w/ chalkboard paint on it but I decided the wood was too pretty as is.
I converted the photo to black and white in my photo editing program and printed on regular printer paper. Then using Sabby's tutorial, I covered a plain canvas board with Mod Podge ( I didn't even paint it...it was already primed and gesso'd) , stuck the photo to it printed side down ( remember to print any text mirror image!) and let it dry for 24 hours. Then wet the back of the paper and rubbed it off. I then added a scrap of scrapooking paper: 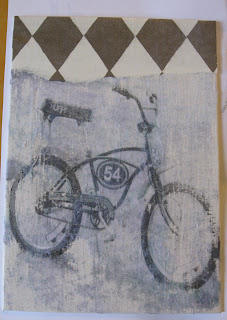 I then spelled out his name and the word bike with some pewter letters I had on hand and superglued them to the canvas. I really like how aged this looks.
I didn't leave the cabinet door completely alone...that's not what we do is it?!  I cut a piece of scrapbook paper to fit the center panel and Mod Podge'd it on: 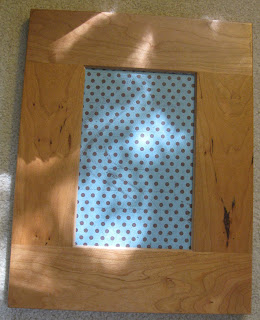 The sun  decided to make a rare appearance and mess up my picture, but you get the idea. And yay...another use for my still ginormous roll of carpet tape, which I used to adhere the canvas to the cabinet door.

Here's his card, using images from The Graphics Fairy along with a transparent frame from Colorbok's Nocturne collection. 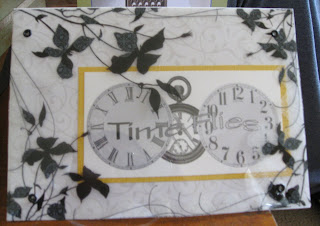 Oh.My.Goodness. New technique!! I'm bookmarking this so I can try it soon. I love how your bicycle came out!

Thanks Michele. I'm definitely doing this again! Go visit Sabby so you get the official instructions in case I messed something up in the translation.

Oh my goodness, what a fun blog you have! Thanks for the kind comments about my canvas project, and thanks for following me. I am now one of your followers. Can't wait to check back for updates :)

This is so great! Love it.

Thank you so much for coming by my Blog for a visit and your kind comments :)

I love what you created for your husband for Father's Day. That was so sweet. I have not tried an image transfer yet but you have inspired me to!

Carol, this turned out WONDERFUL! I've been meaning to try this technique out with pics of old objects as well and you bike turned out great. SOLD! Thanks for the linky love and credit.
Sabby

What a great gift!! I'm itching to try that technique now! The card is wonderful too. Thanks so much for linking this up to Brag Monday!

I just wanted to stop by and say "hi" as I've seen your name on different blogs--love it!
I'm in New Orleans and I usually post to the Graphics Fairy on Mondays...
What a wonderful blog you have!
Hugs,
Cindy Adkins
www.recoveryartist.com

Oh, thanks so much for writing me back...I'm sorry I didn't refer to you by your name, but I couldn't find it on your blog...(I know it isn't chocolate!) :-)
Wonderful to hear from you and your work is
beautiful and I especially love the clock designs--gorgeous!
:-) Cindy Adkins

So lovely...i love the polka dots...thanks for inspiring. xoxo

Hey Carol ... I noticed on your blog that you had linked this to "anything related tuesdays" and I did the same thing following your lead!

Stephanie Lynn @Under the Table and Dreaming said...

This turned out fantastic. The cabinet looks like a very expensive frame. I really like the thickness! What a great gift - I am sure he was thrilled! Thanks for joining the Sunday Showcase. I greatly appreciate it. Hope you are enjoying your week! ~ Stephanie Lynn

I love it!
Thanks for sharing @ Anything Related!