NOT Headed for Project Runway...

but my creative / thrifty /  curious/ CHEAP / re-purposing mind continues to be intrigued and inspired by all of the amazing fashion re-style projects around blogland. For example a very cool denim skirt over at The Sewing Dork  (Dork must mean talented genius in some language I don't know, because she is). It's from an old pair of jeans.  I've seen other skirts made from jeans and it's been one of those projects I've wanted to try but have been afraid cutting up jeans I paid actual money for because I am not much of a seamstress.

Thing is...those jeans I paid actual money for ( which came from one of my favorite shops Chicos...) have been sitting in my closet unworn because they're actually too big (yay!). So yes, they could have been donated to charity ( if Mr. Chocolate reads this, no I'm not cleaning out my closet today) but I decided to go for it and try to make myself a skirt. I'm not going to get better at sewing if I don't ever do it right? So here's how it went:

Using the tutorial from The Sewing Dork ( I wish I was such a Dork) I cut off the legs. 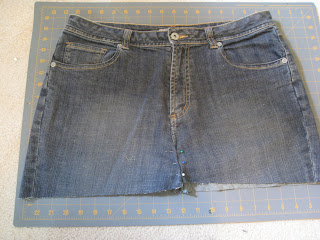 and opened the seam right under the zipper placket I re-sewed that to make the front lay flat. The next step in the tutorial uses the legs you cut off which you use to make panels to attach to the upper part of the skirt. She used two but she is taller than me. So in addition to being a sewing goddess, there's that! Being shall we say "height challenged", I only needed on leg! Evened the leg material up and sewed it together. 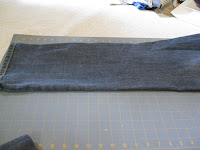 I got wrapped up in trying it on and adjusting seams ( I managed to actually take the sides in and as long as no one ever, ever, looks at the reverse side, it looks OK!) and didn't take pics during this part.  Well I really oopsed  and missed part of the seam when I was sewing the bottom panel on but I was not about to rip the whole thing apart so I did some Frankensteinish top stitching to repair it and had an "aha" moment and decided I'd just slap a flower on top of it and no one would ever know. Unless they read my blog. Then I decided the flower was lonely and made two more. Being short has its advantages...I had another leg leftover afterall! 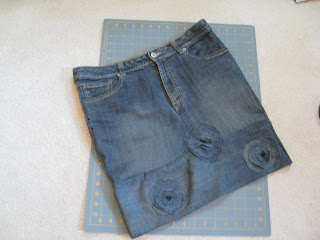 Here's a closeup of the flowers: 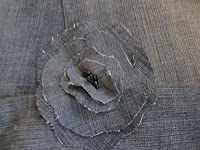 Like I said, I won't win Project Runway ( Project Run-Away maybe) but it'll do for going to Safeway!
Posted by Carol, The Answer Is Chocolate at Sunday, June 06, 2010

I think it looks cute! I have several things I've made where as long as no one sees the inside they think I'm amazing ;]

I think your "new" skirt is adorable!

You're killing me with your Frankenstein humour! I too have been known to place many a flower over spots that need adjusting. I can't believe you did this in a day. Awesome.

Thank you Blue Artichoke and "The Sewing Far From a Dork"! It had its moments of frustration but ultimately, it was fun!

How wonderful! Love the flower detail!

WOW...I think it is cute too...I have never tried sewing jeans. COOL!
Thank you for the Bday wishes :)
XOXO
Frenchy

It's very cute although I'm a little concerned about the location of the top flower....if you know what I mean.

You are very brave to even attempt this. How cool to actually own jeans that are too big.!

lol Lindalou. Yes, I can see the concern but I am SHORT and where the flower hits is "safe".

What a darling idea!!! I need to make one of these for my daughter!