When my son was little, it always bothered him how things went immediately from Halloween to Christmas. Thanksgiving was the overlooked holiday as far as all of the stores and decorations went. So I made sure that we decorated properly for Thanksgiving and that we celebrated it the same way that we celebrated the other holidays which in my case means sending cards. Not quite as many as I do for Christmas but more than I do for Halloween. Given that it's always a busy time of year, I don't always have time to stamp the quantity of cards I need to make so I look for creative alternatives that still allow for a handmade touch and imprint. My computer is an invaluable art tool and it took me a while to stop feeling like I was cheating by using it.

My handwriting has gone downhill since the days when the nuns used to emphasize penmanship and with so many cool fonts to choose from it's just too much fun, so I like to use the computer to generate sentiments. 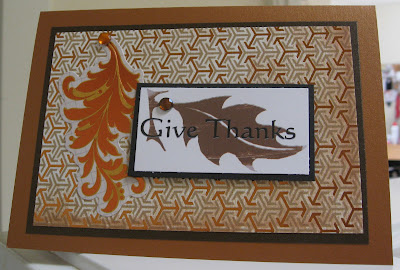 Created the "Give Thanks" panel using a leaf graphic from my graphics program, altering the color, using a transparent cracked effect and then layered the sentiment on top. Printed on white cardstock and matted with black. This card was made using metallic copper cardstock (Stardreams) and the DCWV Premium Stack "Naturals" that I used for my "Turkey Tails" banner. Finished with "M&My Big Ideas" Copper Willow foil sticker. Stickers are another great tool to use when you have to make a lot of cards. 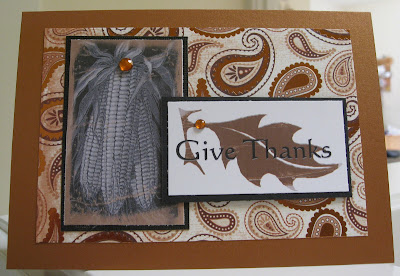 For some of the other cards I made, I selected a Thanksgiving Corn graphic, changed it to black and white, used the same transparent cracked effect in my graphics program and an option to color behind the image in a complementary brown. Printed, trimmed, matted with black. As with the first card, finished with complementary colors of adhesive rhinestones. 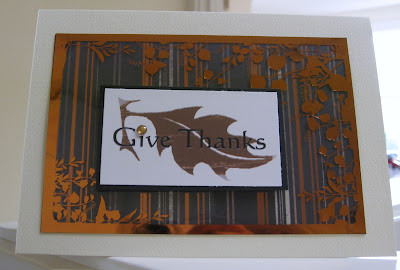 This card uses transparency overlays by Colorbok. Package of 10 ( it's called Nectar) was $4.99 regularly but I bought on sale for 40% off at JoAnn's. I fell in love with the copper foil effect of this so of course I bought 2 packs! Each design is different. For the cards I made using these, I just mounted using Diamond Glaze on a panel of DCWV foiled paper (Naturals) and the put the focal sentiment on top of the transparency using a foam dot.

Thanksgiving Party At All Thingz Related

of the "Gratitude" banner in recognition (and gratitude) of reaching 400 followers is...... 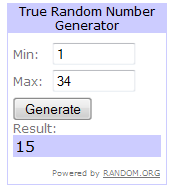 Thanks again for all the support and sweet comments!
Posted by Carol, The Answer Is Chocolate at Sunday, November 07, 2010 4 comments:

I mentioned in a previous post that I wanted to start paying it forward / giving it back to the blogging community. It's been six months since I started blogging and in that time, there have been so many encouraging and generous bloggers who have shared their time, tips, and talents. I've been really blessed to have several of my projects featured and have made some great friends along the way. So I'm kicking off  a weekly feature called "BFF" aka "Blog Feature Friday"

Each Friday I'll feature a blog that's new to me. It may be a brand new blog, or a blog that's been around that I've just discovered. It may have 2 followers or 2,000. This week I'm teaming with and featuring Jo at Smilemonsters who's kicking off a similar thing.

We found each other on a blog hop when I saw this beautiful ring of hers linked up and had to go check it out!

Isn't that the cutest thing?! It's felt and she has a great tutorial here.
Not only does she have wonderful craftastic stuff like this awesome chalkboard transformation:

and look at this banner ( you know I'm a little banner cuckoo) made from brown paper bags:

Uh huh...Oreo Cookie truffles. Need I say more? So go visit Jo at Smilemonsters, this week's (and the first ever!): 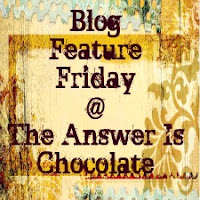 Posted by Carol, The Answer Is Chocolate at Thursday, November 04, 2010 18 comments:

So I was in Pottery Barn and they have all of their Christmas decorations up. I'm seeing lots of stuff with music themes and paper and I decided to be good and play with what I already had which includes a bunch of post-season bargain paper mache ornaments. You know, these: 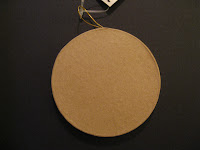 I covered with some sheet music from a book I picked up. It's not Christmas music, but if someone's going to take the time to read the ornament they've got way too much time on their hands. 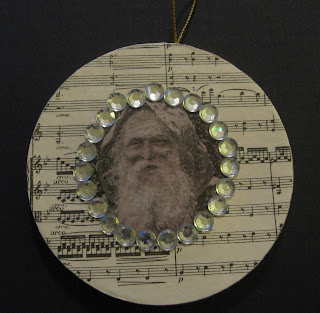 Mod Podged the sheet music on, filed around the edges with an emery board, downloaded this great Santa from The Graphics Fairy, converted him to black and white, MP'd him on and trimmed it with adhesive rhinestones. 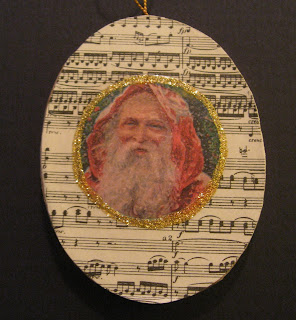 This is Father Christmas in his original form. I just went around the image with glitter glue. And what's Christmas without a star?

Now if you want to see a GREAT Pottery Barn knockoff? Go see what Vicki at Rusty Rooster Vintage did!

Posted by Carol, The Answer Is Chocolate at Thursday, November 04, 2010 20 comments:

No, I didn't make another banner in my sleep, although kind of. Sometime last night my little blog hit 400 FOLLOWERS!  Imagine my surprise this morning?! That calls for a celebration. And since we're in the month of giving thanks, and I thank all 400 of you for coming on this crazy ride with me, I think it's fiitting to show some GRATITUDE with a giveaway. I don't have any sponsors like some of you. Can't offer you a Silhouette ( although if someone wants to hook me up with that....just sayin') but I would like to offer one of you chocoholics a chance to win a "Gratitude" banner, made by me, for you! Just like this one:

Here's how:
That's it! I can't handle more complexity than that right now :) This will run through Saturday November 6 and the winner will be announced on Sunday November 7!
Posted by Carol, The Answer Is Chocolate at Wednesday, November 03, 2010 40 comments:

A "Banner" Crop of Gratitude with Tute

OK I've gone a little overboard on the banners. I think I'm done because I really need to be working on some more stuff for the craft show I'm doing later this month but I decided to do one more banner so here 'tis:

It's hard for me to get a good shot of the whole thing so here it is broken down into two parts: 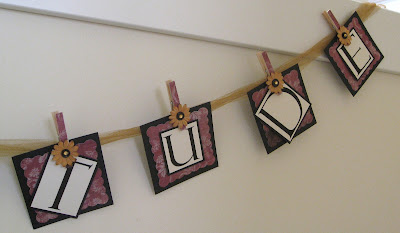 Here's the tute:
Create letters of varying sizes ( you could use varying fonts too but I used the same one) 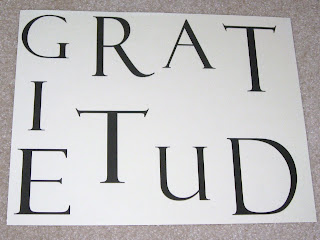 Print out on lightweight cardstock. I used cream. Cut out each letter and adhere to slightly larger black panel.
I used my Cricut (Accent Essentials cartridge) to cut out scalloped edge squares of patterned paper but you could use a large punch or decorative edge scissors to do to the same . Adhere to black cardstock: 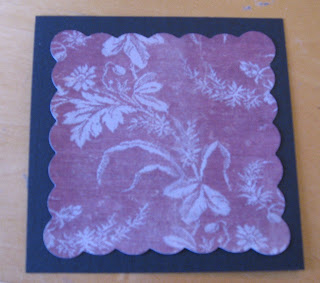 Adhere your letters to your prepared panels using foam dots. I put every other letter at an angle because...I did ( you thought there was a plan?).

Grab some clothespins. I bought a ton when one of the Dollar Stores was going out of business. Use your patterned paper scraps to cover one side of your clothespins. Grab some embellishments. I used paper flowers, buttons, and adhesive rhinestones:
Once all of your clothespins are assembled, line them up and take a picture cause they're cute:
Tulle has become my new favorite banner hanging thing. The rolls of it they sell with the wedding stuff not the kind on bolts in the fabric store. It's inexpensive, sturdy and and plus it's tulle. What's not to like?  Clip your letters to your tulle ( I roll it out as I go along so I know how much I need) and you're done! Here's a close up of one of the letters:
I don't know how to attach it but I did make a pdf of the letters so if you would like it, just email me.

I'm hoping to swap out my Halloween decorations this week for Thanksgiving and have been working on a few new additions to the stuff that's still in the bins. It's really hard not to add to your decor with all the wonderful ideas and talent in the blogosphere. Since Jessica at Craftily Ever After can't stop making these great takes on the "Keep Calm  & Carry On" poster, I can't help printing them! I already framed one for my mantle but she made two more so:

I took two images from my graphics program, (corn and a turkey) converted them to black and white and chose a crackled transparent effect . You can see I didn't quite size the "cranberry" sign correctly ( even though my screen said I did!) but it'll do for now.

Created the letters in my graphics program and cut the other shapes using the Cricut Accent Essentials cart. Haven't decided if this will end up on the mantle or the banister. It's hanging on a strip of tulle with paper covered clothespins. Here's a better look at the letters: 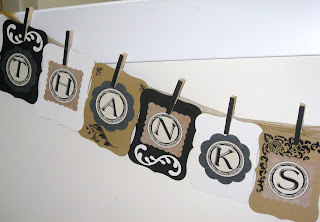 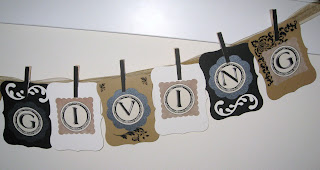 I've wanted to make one of those word jumble things ( is this Subway Art? I don't know) so started small and did this on a 4x4 wood plaque. Just printed the words on scrapbook paper and Mod Podged onto the wood. 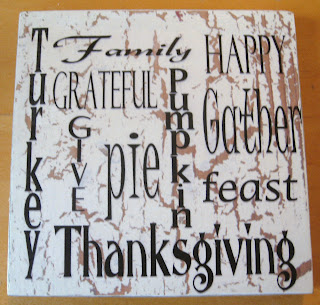