Keep Calm and Study On Card: The Graphics Fairy To The Rescue 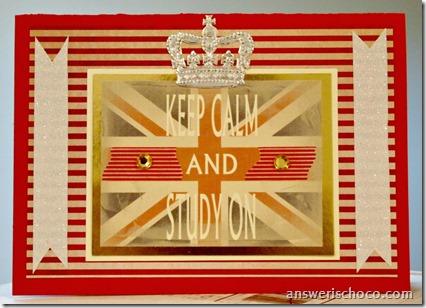 The daughter of one of my besties is off to London for a Summer study abroad program so I whipped up a card to send her off.

I knew I wanted to do a variation of the "Keep Calm" theme but also wanted a British flag so went  to my go to source: The Graphics Fairy . I downloaded the image, then aged it using a graphics program which I also used to generate the text.

Made a 5x7 card from red card stock, layered with a vintage looking red and white striped paper from the Union Square stack by Recollections ( Michaels), added two strips of American Crafts white glitter tape and mounted the focal image on gold and cream cardstocks.

Added a couple strips of washi tape, gold rhinestones, and a silver paper crown. She may be there for the birth of the new Royal baby so it seemed appropriate. 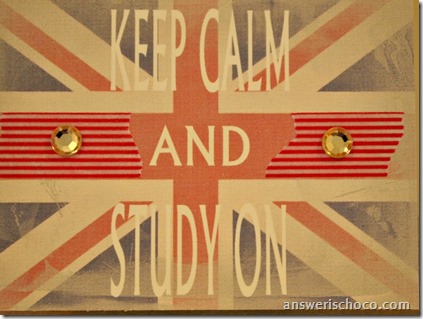 College student in London….I couldn’t resist a reminder to actually study! Not that it’s really needed. She’s a smart young lady and she’ll do great.

This was the laziest project ever but it’s because The Graphics Fairy makes things so darned easy!

I was flipping through my latest Pottery Barn catalog looking for things to knock off ( it’s what we do right?!) and came across this page: 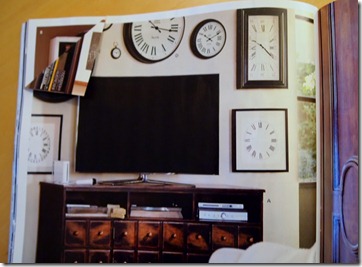 Mr. C is crazy for time pieces and I’m going though a clock phase myself as you could see from my New Year’s Eve party hats. I decided to continue that theme into the New Year and when I saw this display in the PB Catalog, knew I could adapt it. These will go on my mantle but we haven’t put away all of our holiday stuff yet. 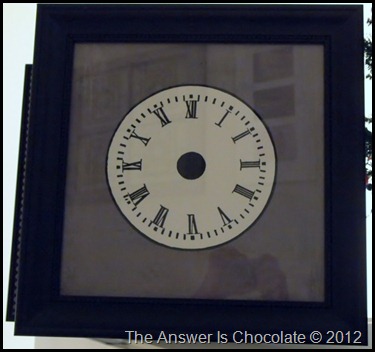 12x12 frame from Aaron Brothers Art and Frame which is a very dangerous place right now because they’re having their semi-annual $.01 sale. Buy one frame for regular price and get the second of equal or lesser value for a penny. It’s easy to go a little crazy.

I used Basic Grey’s “Little Black Dress” collection for the background paper, and printed out the clock from The Graphics Fairy.

The Graphics Fairy also has this wonderful graphic with times from all around the world that I’ve been wanting to use: 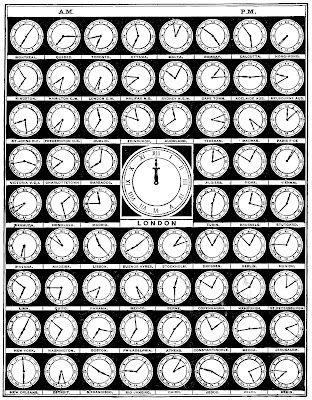 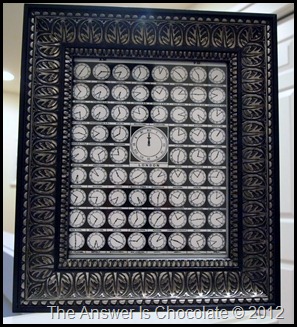 I have a couple of other clock projects in my head so I’ll post those (assuming they come out of my head and into reality the way I want them to!) soon.

Even A New Year's Grinch Can Celebrate: Easy Party Hats

We are not big New Year’s Eve party people. I joked with my mom that I’d celebrate on Australia time which means I could mark the New Year a day earlier and not even attempt to pretend (or pretend to attempt)  I was going to stay up.


I don’t have anything against New Year’s Eve…I love thinking about the year past, the year ahead, goals, memories etc. Just have no desire to dress up in stuff I’ll wear once, and/or be out and around people who’ve had too much to drink.

So it’ll be another cozy night at home. But we’re not total Grinches! We’ll have a special dinner and of course there will be chocolate, and we’ll have a movie or On Demand TV series marathon. Living on the edge I know, but even homebodies can be festive! Especially with a trip to Dollar Tree, supplies on hand and the amazing Graphics Fairy! 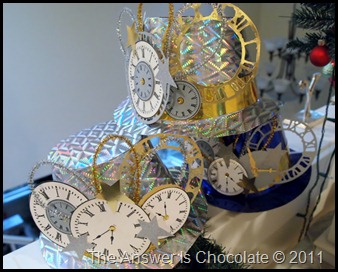 I found the basic paper top hat at Dollar Tree…variety of colors but I liked the silver and gold. Except they only had two. Well they had three but one was smashed in. So I got blue for college boy since it goes with his school colors.

Remembered I’d downloaded a great antique clock graphic from The Graphics Fairy. Printed several on cardstock in various sizes and cut them out. 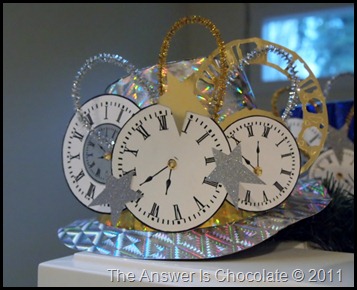 I have the Tim Holtz Weathered Clock die by Sizzix so I cut out several in silver and gold and used up scraps from my Christmas cards to punch glittered silver and gold foil stars. 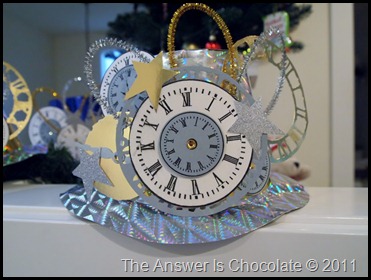 I used 3 chenille stems for each hat, bending each one in half to make a loop and hot glued them to the hat. Then stuck the clock faces on, embellishing some w/ self adhesive rhinestones. Just kind of stuck stuff
wherever.

Not too bad for a $3 investment by a New Year’s Grinch right?

Don't forget, I also have a great giveaway of My Memories Suite digital scrapbooking software going on through New Year's Eve!

Posted by Carol, The Answer Is Chocolate at Wednesday, December 28, 2011 17 comments:

I had a treat exchange to go to last night so thought I’d share the goodies I brought. A girlfriend of mine did this for the first time last year, everyone brings 5 of something and everyone leaves with 5 of something…can be sweets or appetizers. It’s now become a tradition. 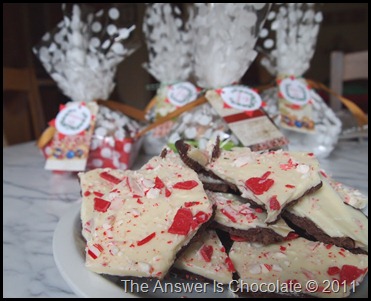 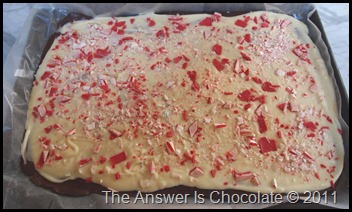 Barks are one of the easiest candies, OK THE easiest candy to make! I used a combination of chocolate chips and candy melts for both the dark and white chocolates. For the peppermint, I used candy canes and Andes Crushed Peppermint thins. 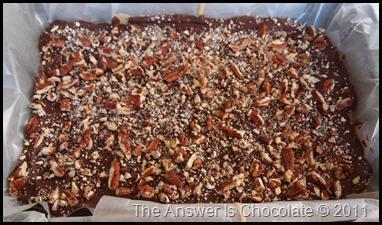 In a clasically brilliant move, I broke my candy thermometer right before I needed it. Do not have candy thermometer on counter when breaking up candy canes and pecans! So I had to eyeball my toffee but I think it turned out OK.

I love packaging things. For these, I used ceramic mini loaf pans I found at Michaels for $1. Put my candies in cello bags, then put them in the loaf pans: 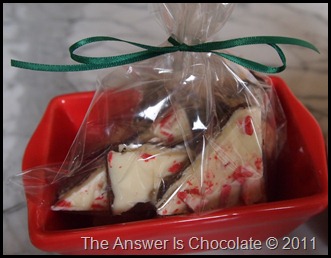 Then I wrapped each in polka dot cellophane, and finished with gift tags I made from scraps from my Christmas cards. I used a holly wreath graphic from The Graphics Fairy as part of my labels. 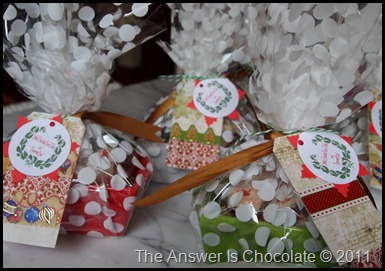 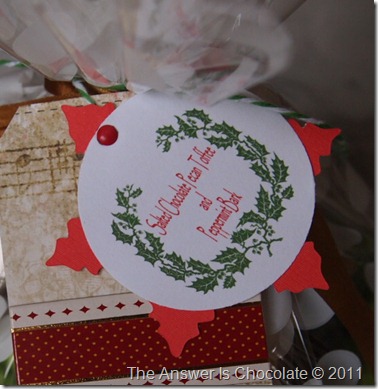 Posted by Carol, The Answer Is Chocolate at Saturday, December 03, 2011 4 comments: 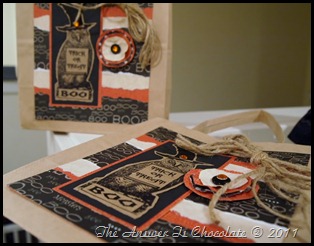 I needed something for the Altered Halloween Canvases I made and I love gift bags. But I’m trying to reduce, reuse, and recycle so I wanted to use things I already had on hand. Enter some small, fairly plain, grocery bags!
I went to my scrap bin and pulled out some coordinating scraps and made the panel for the front of the bag. Then I went to my Graphics Fairy file because there is always something good there! I had downloaded this owl and decided it was perfect. I added a hat and text using my PrintShop Deluxe program, and printed on kraft cardstock. Trimmed, mounted on a black panel, then on an orange one. 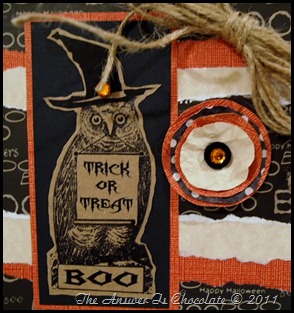 Finished off with a jute bow ( just cut several lengths of jute twine and made a bow; hot glued on to the bag) a layered flower from more scraps, and self adhesive rhinestones. 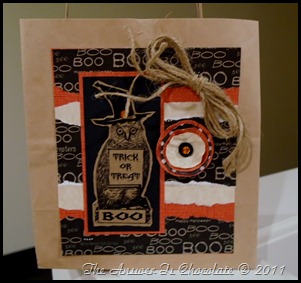 Posted by Carol, The Answer Is Chocolate at Thursday, October 13, 2011 7 comments:

No sooner had I put up my post featuring “Skelly” from The Graphics Fairy, than she waived her magic fairy wand again and POOF , shared an awesome Halloween printable that was screaming to be framed and part of my Halloween décor! 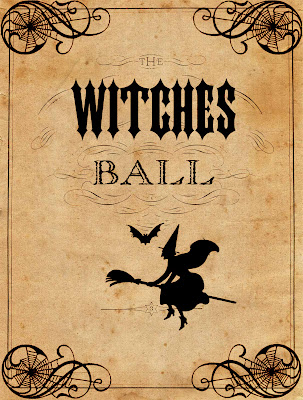 Karin has it in two versions, downloadable ready for framing. 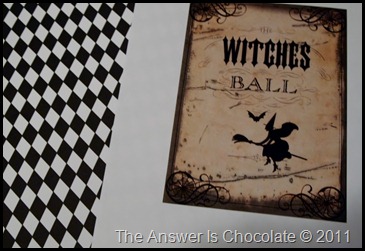 I recently picked up this great black and white harlequin patterned paper by Canvas Corp and I knew it would be perfect for this. I darkened the edges of the graphic in my graphics program and printed it 5x7 on white cardstock.  Cut the Canvas Corp paper to 8.5x11 to fit a frame I keep on my mantel all year, and mounted the print onto it. 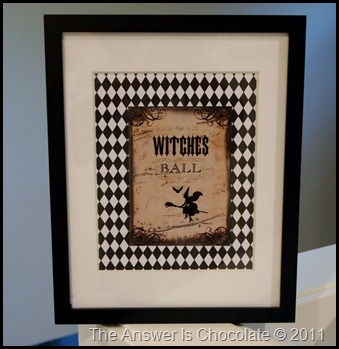 I haven’t decided if it’s bugging me enough that it’s slightly off center. I’ll brood over that some more before I undo the whole thing and scooch it over. But I LOVE the effect of the color of the print against the black and white. Thank you AGAIN Karin!

Posted by Carol, The Answer Is Chocolate at Thursday, September 29, 2011 13 comments:

I’ve been having fun working on things to update my Halloween décor. Heavily black and white/cream, with accents of paler orange tones. Mr. Chocolate’s a little nervous that we haven’t even gotten out the actual Halloween bin(s) yet! 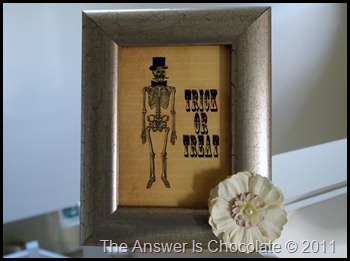 One easy way to decorate is to swap out pictures in frames that are already part of your décor. Easy to bring consistency and seasonal updates together. No one makes that easier to do than The Graphics Fairy! I found this guy whom I’ve nicknamed “Skelly” at Karen’s wonderful site:

How cute is a skeleton in a top hat? Using my graphics program, I gave him a bow tie and a mustache, generated the text, and printed on a sheet of paper from DCWV’s “Ghosts and Goblins” stack. Done and done. 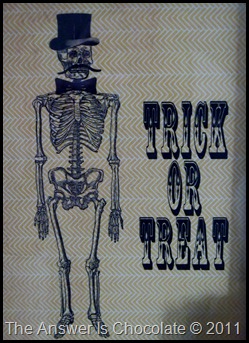 In keeping with the “accent what you have” idea, I had some scraps of paper that I loved and wanted to use them up so I made some pinwheel medallions, combining different papers / patterns. Wasn’t sure what I was going to do with them until I decided to make a “demi-garland” since I didn’t make enough for a full garland. Was passing by a piece of faux stained glass I made years ago (BB…Before Blogging) and…. 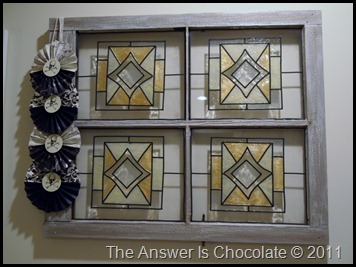 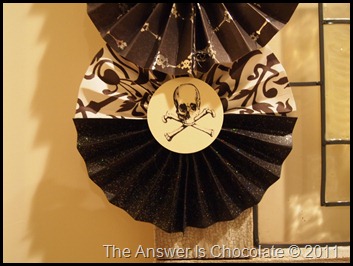 An old window I picked up and decorated using Plaid’s Gallery Glass. 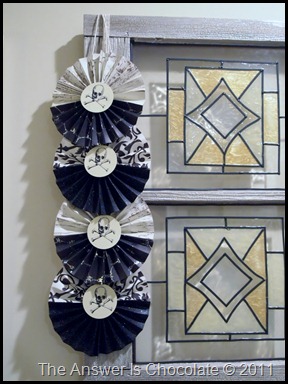 For the centers, I downloaded a skull image from the internet, printed on cream cardstock and punched with a 2” round punch. 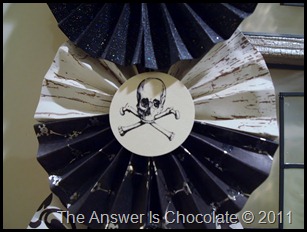 Now to go through those bins!

Posted by Carol, The Answer Is Chocolate at Wednesday, September 28, 2011 7 comments: