I finally got to sit down and play today! I had the general idea for this in my head but it was greatly helped along when Rachel from Holy Craft shared a tutorial on coffee filter flowers that made me really want to bring the idea for this banner (that’s now on our bedroom mirror)  to life. 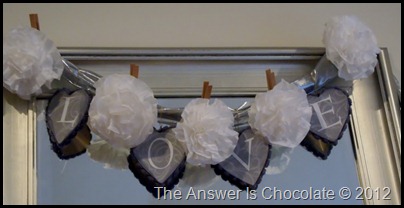 The banner is a combination of coffee filter flowers and paper mache heart shaped Christmas ornaments I picked up 50% off after Christmas. I covered the heart with a gray paper from Echo Park. I had some great lace ribbon trim in my stash and hot glued that around the edge of each ornament. Here’s a better shot of what the ribbon looks like. 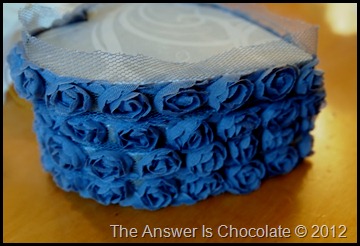 I cut out the letters L O V E on CoCo, my Silhouette Cameo, and put one letter on each heart. 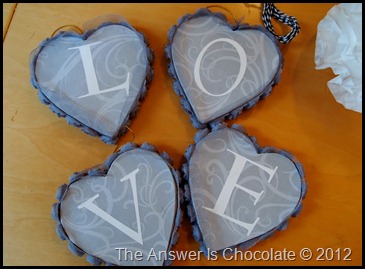 Then I made my flowers. 5 coffee filters per flower and following Rachel’s tutorial. 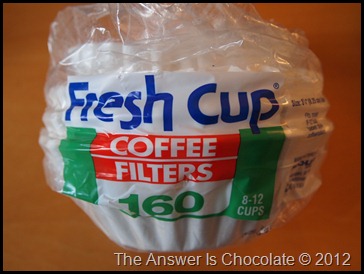 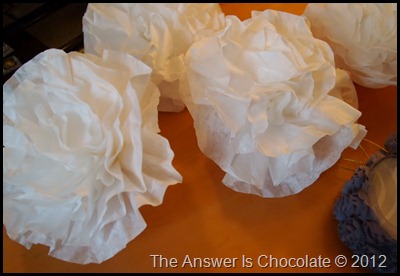 I made 5 flowers so I had one for each end and to go between the letters. I strung the hearts on some silver tulle using the thread that was already attached and then clipped the flowers using clothespins, then strung the banner across the mirror. And while this might be Valentine’s themed, with the colors I used I can actually leave it up permanently. OK maybe they won't look like turkey tails to you, but they look like turkey tails to me! I know...Halloween's still a couple of days away and I'm already moving on to Thanksgiving decorations. Yup. Once you start making banners, there's no turning back so I can't wait until next week to change out my Halloween banner on my mantle for my Thanksgiving one. Now what does any of this have to do with turkey tails? I kind of had a rough idea of what I wanted to do (which didn't involve turkey tails) It did involve coffee filters but I wasn't sure how until I sat down with them. First I folded like this: 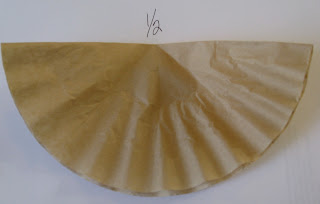 Then I folded it in quarters but got the idea to fold it in thirds. You can fold your half in half to make a line so you know where you will want your points ( which I'm about to show you) to line up. Fold like you're making a paper airplane:
I made one of these for each of the letters I was going to use. Computer generate letters; trim. I liked these "fan" side up and "point" side down and that's when it struck me they look like turkey tails! Adhere one letter to each "tail": 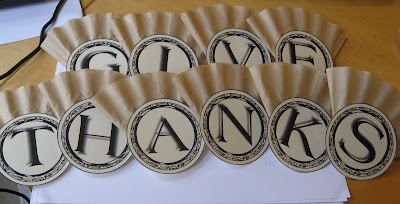 But wait! We're not done. I sound like an infomercial. "If you call now..."

I cheated on K&CO because I fell in LOVE with DCWV's ( Die Cuts With a View) "The Natural Stack" pad when Jo-Jo's ( JoAnn's) had all of their paper pads 40 or 50% off. OK when don't they? Anyway...it's got a mix of matte and metallics with lots of copper...perfect for this time of year! Pulled out some coordinating sheets and cut them in approx 6" banner shapes and matted those on black. Then put my "turkey tails" on top and :
My camera ( OK my photography skills) doesn't capture the brilliance of the colors or the metallics but this paper is almost as yummy as chocolate. 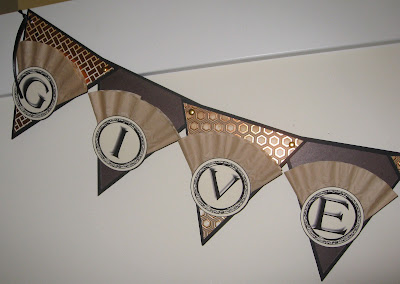 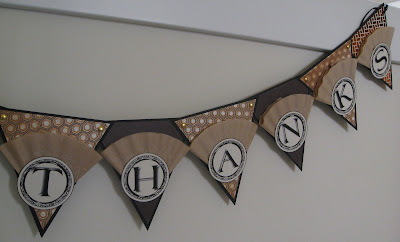 UPDATE:
I've had a few inquiries about how I did the letters so I'm posting here since not everyone has their email enabled. I did mine in the graphics program I use the most which is Broderbund's Printshop Deluxe. I'm sure other graphics programs have similar functionality....this has an "initial cap" option which is what I used and chose a circle graphic but would think you could just do large capital letters. The font I used is called Almeria and I did a drop shadow option. Hope that helps!!
UPDATE 2:
I created a PDF file with the letters so if you would like, just email me through my profile and I'll send.
Linking Up At:

Nope it's not a yummy candy with a coffee center. OK now I'm craving a mocha. Back on task. I know everybody and their sister in blogland has made a book wreath, but as some non-crafty friends remind me "not everyone lives in your world". True, true. Since I'm making stuff for a craft fair next month, I figured maybe there will be people who aren't sick of book wreaths, especially since I saw one recently similar to the technique I'm going to show you that was waaaaaaayyyyy overpriced (IMO). 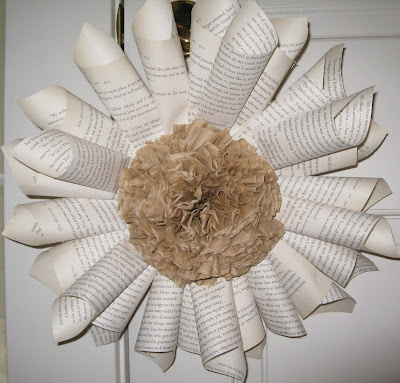 The book pages are mounted on a circle of cardboard from a leftover box. I prettied it up by covering the back w/ some scrapbook paper. But the tutorial is on the center:
I used an old ceral box for my base and went "old school" ( would take longer to load my Expression) and drew circles and cut out. Then I made a bunch of coffee filter clusters. 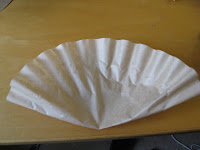 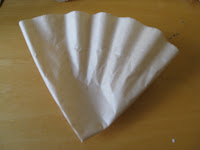 Fold in half, then in half again and gather the bottom into a stem. This will naturally form a ruffle / flower. Staple about 1/2 way up the stem. Turn on glue gun. Start gluing bundles ( I didn't count but make at least 20-25 for a medium sized circle). I started in the center and worked outwards 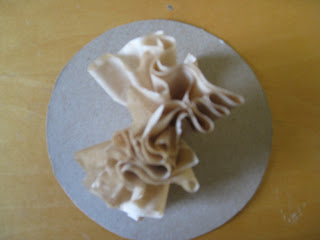 I put the first two back to back and then the next two on either side and just kept working around until the cardboard circle was covered: 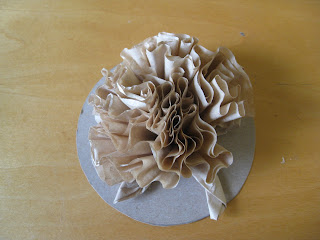 As it fills in, you can fluff along the way to determine how many more of your bundles you need to add. 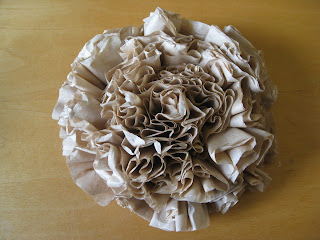 Glue in the center of your book wreath!

Oh you thought I was talking about confidantes or something? No. I'm talking about the inner circle of matboard left over from the book and bottle cap wreath I made! Which, I didn't take a picture of, but it's a circle. Of matboard. You get it.

Since coffee filters come in the bajillion pack, I had some of those left over. So I took a bunch out, crumpled them up ( this is a scientific process...I'm sure there's a physics theory that explains how crumpling increases body and volume because it does) and them folded in half, then in half again, then in half again. Staple to secure each one. If I was a mathematician instead of a physicist ( ha ha ha ha... so not either of those) then I'd know the fraction that comes out to.

Hot glued those around the circle of matboard and then tore a circle of scrap paper to  cover up my staples and then remembered I'd downloaded a cool Santa image from The Graphics Fairy, printed that out cut in a circle and glued to the middle of my whatever this is  I put a ribbon hanger on the back so it's an ornamenty thingy.  Framed it in buttons and added some clear rhinestones which don't glisten the same way in a picture so you'll have to just take my word on it. So what did I end up with? 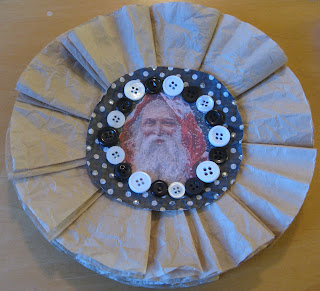 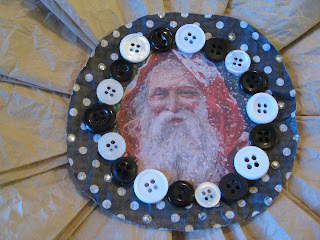 So now you know what I did with my inner circle. Because I know that was keeping you up nights.

Unless of course I make something last minute next week which I probably will since I called this final. I thought my mantle needed some "bunting". What do you think? 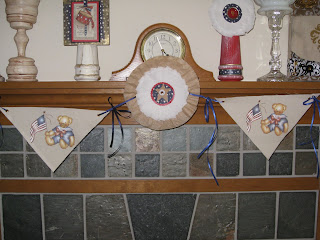 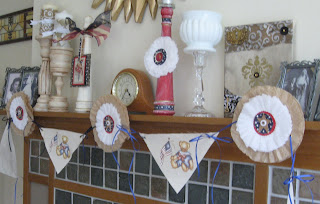 I made coffee filter and crepe paper medallions and used up some patriotic bear iron on transfers I picked up "because they were a steal deal" words that are a permanent fixture in my vocabulary! It's more "cute" than I normally do but at the same time it's vintagey and oh who cares, I like it.

For the coffee paper medallions:

I scrunched the coffee filters, opened them back up, stacked on top of each other and then folded in half, stapled...opened, folded in half the other way, stapled. I don't know why I did this. It seemed like a good idea. 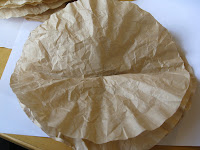 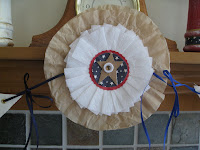 I used a glue stick to attach my crepe paper to my cereal box circles. To me it's the perfect medium for this because it holds the crepe paper yet you can still pull it up without ripping if you need to re-pleat. I just glued down an edge, made a fan pleat, put some more glue stuck on, made another fan pleat and so on. I went around twice to give them some body.

Cut out cirles from the red paper, and then slightly smaller from the blue / white starred paper and crumpled the latter. Stick those in the middle of the crepe paper circle; stick to the coffee filter base. Punched a rustic star from some scrap kraft paper. I added a white button, and because I'm blingy that way, an antique gold self adhesive rhinestone.  I punched a hole on either side of the medallion and added an eyelet so it wouldn't tear when I went to hang it.

For the canvas pennants:
Cut pennant; iron on transfer, punch holes on either end, place eyelets, string to rest of your banner. 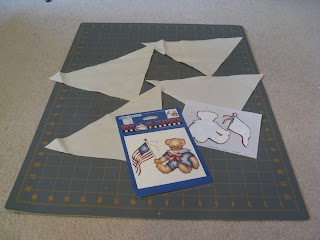