I just realized that this post will be my 200th since I started blogging! I am one chatty Cathy!

I haven’t been very productive in the “making” department lately. Between Christmas, and two trips to the doctor for sinus, bronchial infections and an asthma attack, well I’ve been a bit lazy! But I did make a couple of New Year’s decorations just to have something festive. No tutorial…just a pic:

I made a cone shaped party hat using a template I found online and trimmed it with some pom pom fringe using double sided tape. Downloaded a New Year’s printable collection and cut out and adhered to bamboo skewers that I stuck down through the top of the hat and using a clock graphic from The Graphics Fairy, added the year to it and stuck it on front!

I haven’t framed this yet but I wanted to have something special for 2011 that I could keep up all year. We have a few major milestones this year. Our son turns 18 ( my baby!) and will graduate from High School, and we’ll celebrate our 20th wedding anniversary. So I made this “Family Milestone Subway Art”: 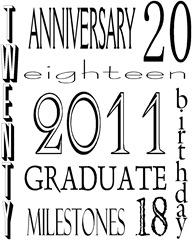 Happy 2011 everyone. But as we wrap up 2010, thanks for a warm welcome into the blogging world, the many new friendships made, laughs shared, generosity shown, and inspiration provided. Here’s to more of all of that in the New Year!
Posted by Carol, The Answer Is Chocolate at Friday, December 31, 2010

The milestone subway art is such a great idea! Love it. :) I haven't done much in the crafting area lately either. Definitely need to change that!

Very cool! And elegant! Hope you have a wonderful New Year!

This is too fun!! Congrats on the 200th post. That's fantastic! Feel better soon!

Because I love reading your blog, I have awarded you the Stylish Blogger Award. Head over to my blog to accept it: http://introvertedwriter.blogspot.com/2011/01/better-late-than-never-right.html

2 cute projects! Feel better and thanks for all the fun in 2010...now you just need to match last year's creativity. (You'll never top it, because you kept me in awe all year..on the other hand, you probably will top it and I'll plotz.)

OH NO, I had sinus infection last week. No fun! Feel better!!!!

Congrats on 200 posts! Just love your NY hat to bits. Elegant in its B&W colour palatte but also quirky and fun with that cascade of squares and circles.