I'm bouncing back and forth between Thanksgiving and Christmas like I think a lot of us are. In my case it's partly because I'm doing a craft fair the weekend before Thanksgiving because I'm insane. 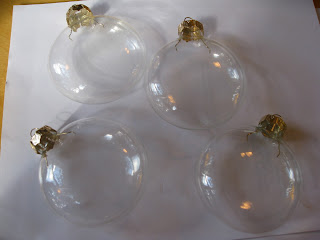 These are not the ball ornaments but the flat round ones? Like if you flattened the ball ornaments. I tend to stock up on stuff like this after Christmas when they're on sale so I had some on hand. I did buy some new K&Co  stickers. "Snowglobe" they're called and that's exactly what they look like...the snowglobes you shake and then snow comes down. So I had this idea. I squeezed some glue inside...whatever dries clear (I used Diamond Glaze on this one because it dries pretty fast and I wanted to see if this idea panned out, but since it's pricier and I'd end up using a lot for these, I switched to plain diluted white glue for some others. Takes longer to dry but cost effective! Then added silver glitter and just shook it kinda like a snow globe: 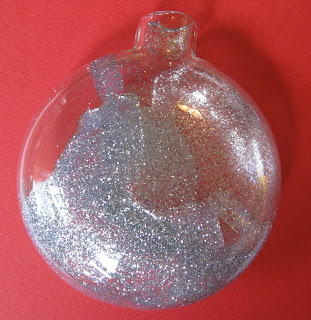 I didn't want it to coat the whole thing so it's just kind of wherever it went. After that was dry, I took one of the "Snowglobe" stickers and stuck it to the front: 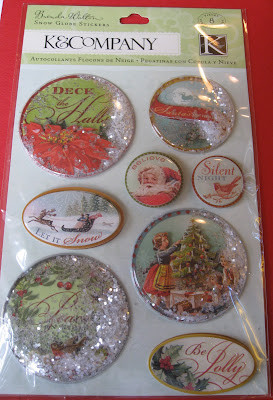 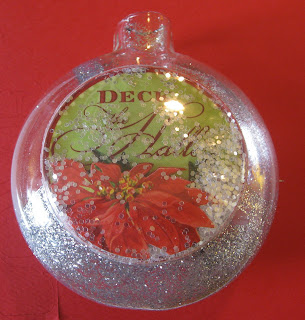 I decided it needed something more, so I hot glued a silver pipe cleaner around the sticker. Put the cap back on and finished off with a bow, a button, and a rhinestone: 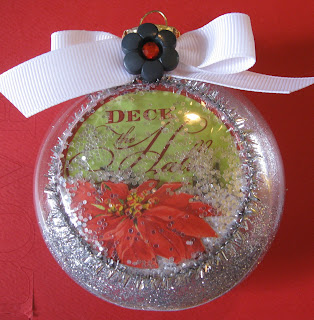 I also did some more with the paper mache ornaments. These are super simple and fast: 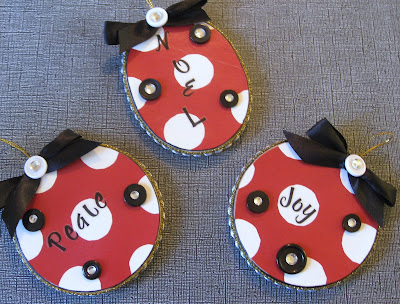 Plain paper mache ornament, covered with polka dot wrapping paper from stash ( this is from Paper Source and I think they carry it every year). Adhere paper to orny with Mod Podge. Add clear alphabet stickers. Add bow, buttons and I put rhinestones in the center of the buttons. I hot glued braided trim around the edges to finish.

Posted by Carol, The Answer Is Chocolate at Monday, November 08, 2010

I haven't seen these flat ornaments before. I love how you embellished yours-it looks brilliant!

You are so very resourceful and have some great ideas. Annette x

Totally awesome! Those snow globe stickers are so great!

Those look great! I love it!

Those snow globe ones turned out so cute! I love the addition of the silver pipe cleaner. It really brings it all together.

I found some of the paper mache ornaments too. I'll be posting about them in the coming weeks. :) You can do so much with them.

Very cute ideas! Love the glittery ornament, I've tried a couple of those, when it works, they look really cool. Some were thrown in the trash... lol..

Faux snow globes! Such a cool idea! Never would have come up with that. They look adorable, and I love how you embellished with the pipe cleaner and ribbon, too. Just the perfect amount of fancy.

What clever ornaments. It is amazing how they looked great but then you kept adding embellishments and they looked even better.

Loved your Thankful cards post. I have been trying to figure this one out too and I think I have decided the difference - we have parties and celebrations all month during Dec. even for Halloween, kids parties and church parties and neighbor parties can be throughout the month. With Thanksgiving it is just the one day. I love your idea of adding to it by sending cards.

I am loving the flat ornaments! BUT I love what you did with them even more. I adore snow globes and this take on them is fabulous.

Great projects! I like the looks of the squished ball ornament, :) I haven't tried anything with those before! Thanks for sharing!

Thank you so much for sharing your tutorial at the DIY CRAFT TUTORIAL linky party at http://www.FineCraftGuild.com

I love this idea/tutorial : thank you!

Hope you also found some tutorials in the party for projects that interested you ...

See you back next Wednesday, we hope, and meanwhile, have a creative week,

Wow! Love those ornaments!! You have inspired me :)

I am loving all of your ornaments! If I make more ornaments, hubby might leave, hehe- the attic is full of them and we don't have enough trees for them! I have to rotate out the theme from year to year!

Love your globe ornament! So creative!

It's A Priceless Life said...

I haven't seen 'snowglobe stickers'...I need to get some!! LOVE the ornaments you made!!! I'm your newest follower. Come check out my blog when you have time.
Shantel @
www.itsapricelesslife.blogspot.com

What a great idea! Love these homemade ornaments!

You are being featured TODAY!

To give you some extra exposure, I’m combining featuring you with this week’s DIY craft tutorial linky party, which opens today.

So when picking up your 'I'm featured' badge, you could take a new project along and show of your talents, again and again.

We love to showcase your tutorials and at time, feature your work. It’s excellent!

http://www.FineCraftGuild.com/diy-linky-party-21/ will be up in an hour.


Have a craftful, happy day, Rose

I love the snow globe ornaments! I featured them on my friday favorites!
http://lilbitofus.blogspot.com/2010/11/friday-favoritesornaments-edition.html

I added this project to our site and linked to you. We are looking for more Christmas Crafts as well, so if you have any similar projects please feel free to let me know. Thanks!

Great ideas! I would love for you to link up your ornaments to my blog here:
http://singingthreelittlebirds.blogspot.com/2010/11/christmas-ornament-link-up-singing.html

Hi, Some one from facebook refereed your link i have book marked it nice blogs you write see Free Adwords Voucher here