and playing with Picnik. I usually just upload my photos without doing much to them except maybe cropping them. But I was waiting for something and decided to play around on Picnik before posting one and it was so much fun. If you missed their Halloween themes and effects, they have some for Thanksgiving and I'm sure will have some for Christmas in addition to the standard holiday effects they have all the time.

I've been busy making colorful tags and cards for an upcoming show and must have been going through neutral withdrawal so decided to make some neutral tags. Just used scraps, a punch, and cut the tags on my Expression. Combine that with some gold rhinestones, copper eyelets, and Picnik and:

I played with the "snow" effect in Picnik and used the "museum matte" frame option. It's hard to tell from a picture, but I punched several snowflakes out and layered them (sometimes alternating colors, sometimes not) using small foam dots. It gives a nice dimension to the tags. 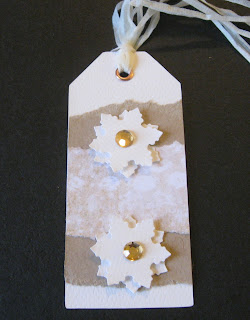 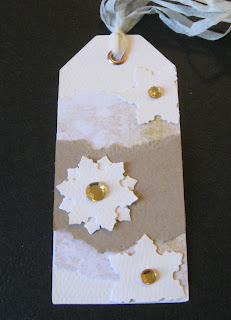 Posted by Carol, The Answer Is Chocolate at Wednesday, November 17, 2010

those are just such cute little snow-ful tags!

VERY pretty! I really like the neutrals. They look very classy!

Oh, I love those pretty tags!!

Heck, those are more like ornaments they are so pretty!

I'm a neutral girl so you know I love them! So cute!

I love these! they are gorgeous!

Very cute! I love picnik! It is a fabulous site!

Thanks for linking these up as well!

Sweet snowflake flowers, love them! Great idea to layer them with spacers.

I adore homemade tags. These are beautiful. Sorry I am a little behind on tickled pink!