So first up , it’s not Mexican Independence Day which it’s commonly mistaken for. That’s September 16. Cinco de Mayo marks the unlikely defeat of the French by the Mexican Army at the Battle of Puebla. I am and forever shall be a history nerd.

But they also have these:

Then over at About.com Candy,  I found this recipe for :

that looks pretty tempting. This includes a pinch of cinnamon and cayenne pepper.
Continuing my journey, I came across S’Mores Nachos at Kitchen Daily.com: 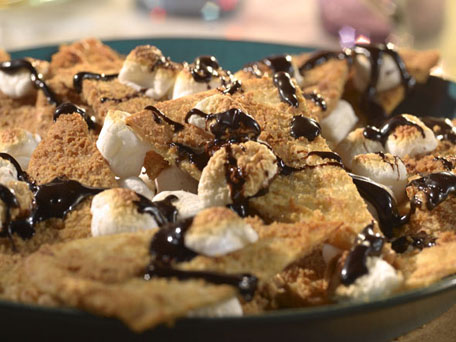 Which makes me feel good because I was noodling the idea of a chocolate quesadilla using cinnamon sugar dusted flour tortillas and dark chocolate cream cheese which I haven’t tested yet!
How about Strawberry Chocolate Nachos?

At least someone else is kooky enough to think of putting  tortillas and chocolate together!
Then there’s this Mexican chocolate cake

Or a fun beverage ( contains alcohol ) : As you can see, there is no shortage of chocolatey ways to celebrate Cinco de Mayo! Enjoy !
Posted by Carol, The Answer Is Chocolate at Saturday, May 05, 2012

Wholly cow! I need to celebrate Cinco De Mayo this weekend so that I can try these desserts!...and that drink!