I Knew I Bought That Orange Frame For A Reason

While he loves to tease me about my trips to Michaels, JoAnn's etc., Mr. Chocolate also knows that I know when and where the sales are. As I was heading out one day in the Summer, he asked if I would frame something for him which gave me the perfect excuse reason to go to Aaron Brothers Art & Frame who just happened to be having their semi-annual  $.01 sale. We all have to make sacrifices right, so I made an additional stop.

Got there, found a frame for him which was a brushed metallic red .  Perfect for what he needed. But I wasn't going to pass up the chance to buy another "of equal or lesser value" for a PENNY was I? You know the answer. The same frame I bought him in red also came in a cool orange. I am not normally an orange person but there was something about that orange and did I mention it would cost me a PENNY?

You would think I'd have used it in my Halloween decorating. Temporary amnesia. Cured of that, and getting ready for Thanksgiving decorating, it all came together when Jessica at Craftily Ever After read my mind and made up a Thanksgiving themed printable!!! (Which she's sharing on her site...be nice and follow if you download it ). This is a horrible pic because I'm not ready to put it on my mantle yet and took it at a weird angle to avoid the glare : 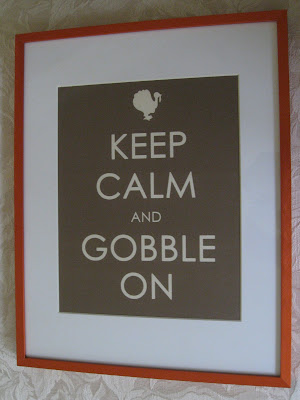 I printed it on cream cardstock. I like the cream and brown with the white mat and the orange. And did I mention the metallic organza tulle ribbon I found at Joann's yesterday? No? There's an orange that matches the frame along with a copper, and a deep brown and yes, I got all the colors.
Posted by Carol, The Answer Is Chocolate at Thursday, October 28, 2010

Email ThisBlogThis!Share to TwitterShare to FacebookShare to Pinterest
Labels: Craftily Ever After, Printable

Love it!! Great colors!!
Thanks for sharing!!

I did a project with this printable too! Come check it out!

So cute and perfect in that frame. Can't wait to see your Thanksgiving mantle.

Hey, very nice site. I came across this on Google, and I am stoked that I did. I will definitely be coming back here more often. Wish I could add to the conversation and bring a bit more to the table, but am just taking in as much info as I can at the moment. Thanks for sharing.
Karma Reclining Wheelchair Km-5000