I keep seeing all these great ideas for Halloween around blogland and it's getting me in the mood to decorate. Since my husband would look at me even funnier than he usually does if I asked him to get the Halloween bins down this early ( I'm short, he's tall, it's the way it is) what's a crafter to do? Make something of course!

I've actually been pretty good the past several years not buying a lot of new decorations. We don't really get any trick or treaters and especially since our teenager has been able to drive (away from us!), we really don't have much Halloween activity at our house so it seemed wasteful to buy or make more stuff. BUT...I keep swooning especially over vintage or more sophisticated Halloween stuff . Especially since I see more done in classic black and white!!! Ooohh la la.

So since I can't buy anything this month , I went to the mystery closet and pulled out these:
and picked out some shapes from the Bundle O Plaques. Painted everything black: 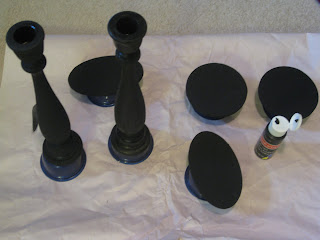 I've been collecting Halloween images from The Graphics Fairy and chose a very cool skull image. Might be too creepy for some, but I'm twisted that way and don't have little ones who might get scared. The big ones can just deal.  Printed two skulls and some text on clear Avery label paper.

On the round and oval plaques, did the "white glue crackle" technique from Stashbusting project #1 and then over that with cream paint. Dried it with my hair dryer because I'm impatient and one of you wonderful people confirmed it enhances the crackling. Trimmed the skulls ( I feel like Temperance Brennan from "Bones"), put them on the oval plaques, hot glued silver pipe cleaners around, glued them to the candlesticks. Then glued the round plaques to the top of the candlesticks ( it will make sense when you see if until then, don't judge), and plopped on some clear self adhesive rhinestones around the edges: 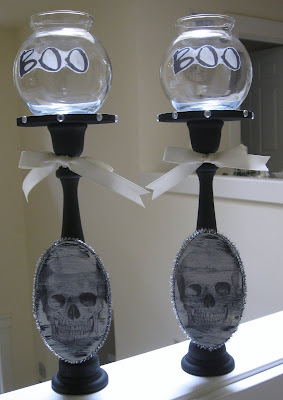 I like the effect of the vellumy label paper over the crackle paint. It's kind of ghosty.  Dug out a couple of glass votive-bowl thingies which I'll put black pebbles and candles in later) and trimmed and adhered the text I printed out on the label paper.

Here's a closeup of the skull plaque. You were warned....eeek....scary: 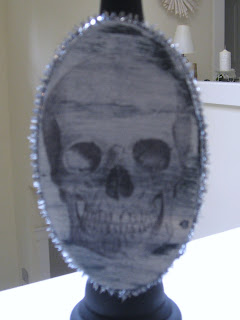 Posted by Carol, The Answer Is Chocolate at Wednesday, September 08, 2010

I still wish I could to be perfectly honest, but I feel I am stretching creatively (no choice-hello!!) I love these!

I love it! It's nice to know that I'm not the only "twisted" person who likes using skulls in halloween decor. :) Great use of items you already had on hand!

Oh super cool!! I love the skulls and the idea of the pipe cleaners around the plaques is great! Super cute. Or I should day . .. Super Scary!! ;)

Love it! I'm gearing up for Halloween already too. I throw a big party and decorate the whole house. I love what you did with what you had.

as always, you impressed me!

oh wow I love these, so brilliant. x

Loving these, lady!! Great job!! :D Oh and yes...we're in the same "dreamland" about our wishes for the perfect room. Have a sweet day!
Hugs,
~Terrell @ Frou Frou Decor~

These are elegant! I love them and want them! I love that Graphics Fairy, too - you should send her this picture.

I would love to have you join me tomorrow over at our Sassy Sites blog party! It's our Feature YOU Friday! Come by and check it out! xoxo

Oh, my goodness....Love it! Love it!
Thank you for sharing!
Have a boo-tiful evening!
Leticia

So darling! I'm a little twisted, too. Wouldn't colorful Day of the Dead skulls be cool, too?

What, is stashbusting synonymous with no sleep? How do you find the time? These are awesome, and way to bust that stash! lol!

Thanks for joining our blog hop over at Sassy Sites! There are some amazing blogs out there, and you are definetly one of them! I'm a follower of yours too! Happy Friday! xoxo

Love these! The more skulls, the better.

Thanks for linking up to my Friday link party! See you this Friday!

I just featured you! Come grab an "I've been featured" button! And thanks for participating!
alittleknickknack.blogspot.com

Hey, very nice site. I came across this on Google, and I am stoked that I did. I will definitely be coming back here more often. Wish I could add to the conversation and bring a bit more to the table, but am just taking in as much info as I can at the moment. Thanks for sharing.
Portable Wheelchair

Hey, very nice site. I came across this on Google, and I am stoked that I did. I will definitely be coming back here more often. Wish I could add to the conversation and bring a bit more to the table, but am just taking in as much info as I can at the moment. Thanks for sharing.
Transport Chair

Manish Batra said...
This comment has been removed by the author.
August 13, 2015

Manish Batra said...
This comment has been removed by the author.
September 01, 2015

Manish Batra said...
This comment has been removed by the author.
September 02, 2015

Manish Batra said...
This comment has been removed by the author.
September 07, 2015