Stashbusting September Project #6: These Boots Are Made For Witchin'

So my husband had these pants. Got your attention? It is about a pair of my husband's old pants that a couple of months ago, he put by the door to go to Goodwill. I thought they were too far gone for GW because the hems were all frayed but rather than toss them, of course I saw them as fabric. For what I didn't know...yet.

Since I've been doing some Halloween prep, I decided I wanted a pair of witch boots. Just seemed like a fun idea. I figured I bust some of my felt stash and then I saw the pants! They're nice cotton twill..perfect for witch boot stockings right? Out came the scissors and off came the legs. I now have a pair of shorts left. Any hoo... I downloaded a pattern from the internet and lengthened it a bit because while I'm short, my imaginary witch is tall! 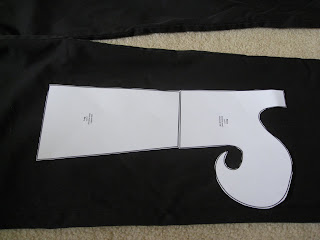 Sewed the basic boot together :
Got busy with some embellishments, including a pair of earrings that for reasons I will never know were included in a jar of old chandelier crystals I bought at an antique store. I had some fabric flowers left over from another project so on those went. I had some fabric scaps sitting around so those became some more flowers. I figured I was on a flower theme here so out came some paper flowers from my embellishment bin and on those went. Of course what's a witch without some bling, so in the middle of the flowers went buttons and in the middle of the buttons went rhinestones.

Ripped some strips of scrap fabric to make "belts" for my boots and here's where the earrings came in to dress up the "belts".

Finished them off with some raffia handles so I can hang them up. I may leave them here on my end caps: 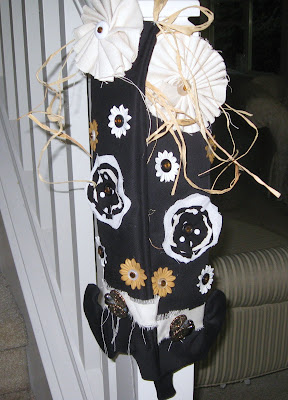 Or I may add them to a garland I've yet to make for my mantle.

Posted by Carol, The Answer Is Chocolate at Saturday, September 11, 2010

Carol! They are amazing, I love them so much. The flowers are such a cool touch. Love them!

Those are too cute! I might have to borrow this idea so I can have my own witchy booties! Love, LOVE!

Oh my gosh, Carol,
You are amazing!!! How adorable!
Oh..and I came over to thank you so much for voting!!!!
Hugs,
Cindy
xox

These are awesome! Oh my gosh.. I can't wait to see what else you do with them!

So-So Cute ... I love them! I have a pair of black jeans in my stash busting box. Wasn't sure what to do with them ... can I borrow this darling idea?? Thanks for sharing!!!

Oh, these are too cool! Love them, and they're just right for your staircase! lol!

Adorable! Isn't decorating for Halloween fun? Love your witch boots - thanks for sharing a great project. Found you through Sunday Showcase.

So cute, and great refashion!

Lol!
These are adorable!
*Thumbs up* for Stashbusting!

Ooh! These are just completely cute and I can see them used in all kinds of ways. Wildly original, I love 'em! What a great stashbust, too.

Those are so great! I love them!

Your witch boots are adorable! What a great "witchy" project!

These are adorable! You are so creative.

Those are totally cute! Love them!

What a fashionable witch!! Love all the embellishments.

very crafty. I love these. I don't have anything like this. cool

Love the boots! Very cute. Thanks for sharing.

These are adorable!!! I am highlighting them at somedaycrafts.blgospot.com

Hey, very nice site. I came across this on Google, and I am stoked that I did. I will definitely be coming back here more often. Wish I could add to the conversation and bring a bit more to the table, but am just taking in as much info as I can at the moment. Thanks for sharing.
ARAI Approved Side Wheel Attachment 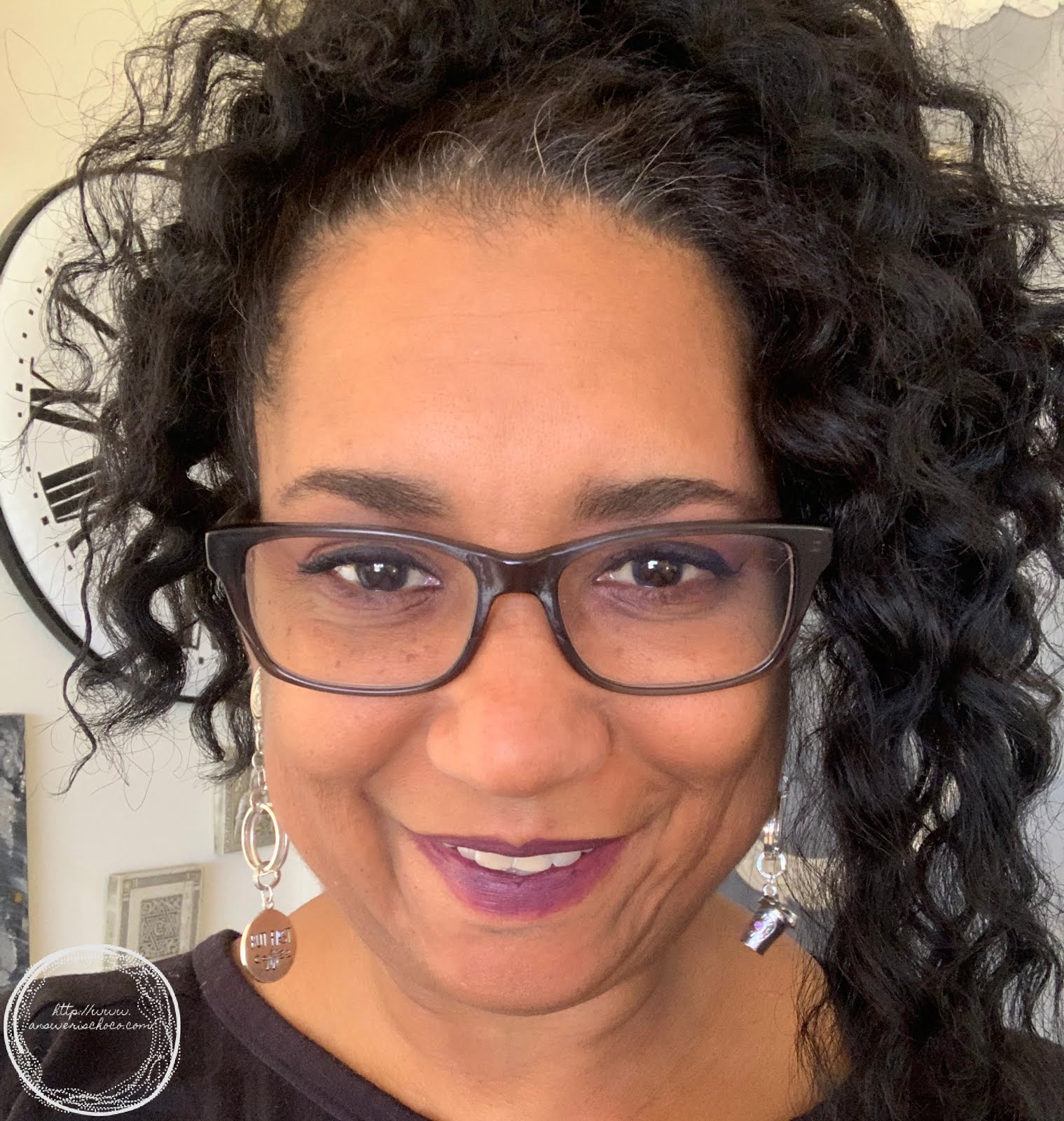