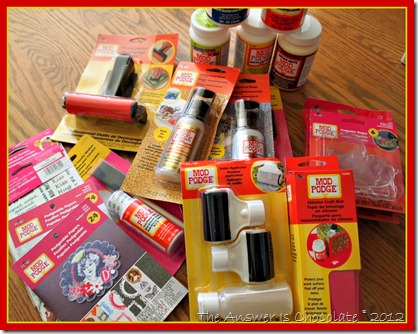 I’m so excited to have been selected to participate in a Mod Podge campaign sponsored by Plaid and The Blue Print Social. I’ll be posting my project later this month, but I’m bursting at the seams with excitement being able to share the goodies I get to play with. I was worse than a kid at Christmas or their Birthday waiting for the Fed Ex man to arrive.

I was even singing a “Come on Mr. Fed Ex Man” song that convinced my dog that I’d lost it more than she  usually thinks I have. And NO I will not be performing that for anyone but the dog.  Saturday was THE day!
There are so many fun things in this stash including some new products that should be popping up at Michaels if not there already. 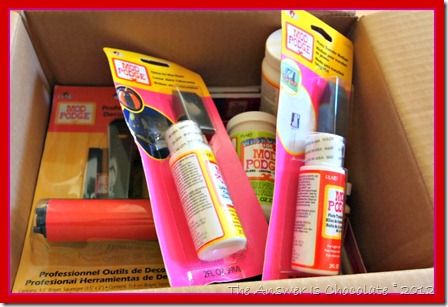 Can you say metallic (Glitter Silver and Gold)  Dimensional Magic? Ohhhhhhh my. And a new Antique Matte finish for vintage-ing stuff up? Yes thank you!  Podgeable papers? Swoon! 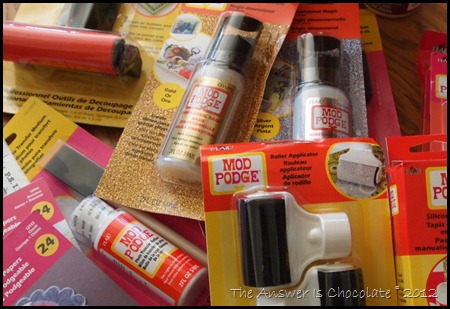 I actually screamed and squealed when I opened the box and my husband and son thought I’d fallen down or something. The dog however, just looked at me like “Not again”.  Hmmm wonder if I can Mod Podge her? Just kidding PETA people! She’s quite used to my outbursts and I love her as much as chocolate and Mod Podge.

can't wait to see what you come up with. I too am participating and posting on the 22nd.

Isn't it incredible? I was in shock at how much stuff we got. I can't wait to see what you come up with. I am a little stumped on how to use the podgeables (sp?). We will see!