Blast From The Past: Tinsel Trees (Stinkin' Easy)

OK this was the easiest thing ever. So easy it’s not really even worth posting about but what the heck.

I have lots of different styles of Christmas décor. I like different looks, and since I decorate just about every room, I figure I can do different styles in each. This year I’ve caught a glitter bug and am doing a kind of retro mid-century modern mantle. Enter the tinsel! 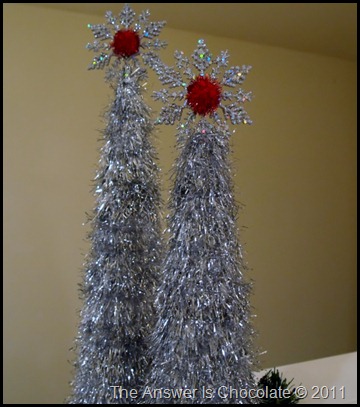 What the heck are they you ask? Tinsel trees I answer. With Snowflake toppers.  Here are the complicated ingredients for this crazy concoction: 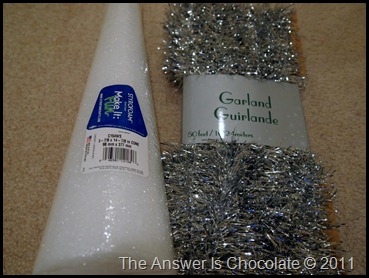 Styrofoam Cone and Tinsel Garland. I hoped to get the cone at Dollar Tree but apparently they don’t have them anymore so I got one at Michaels with a 50% off coupon and one at JoAnn’s with a 40% coupon. The tinsel garland I did get at Dollar Tree. 50 Feet for a buck. 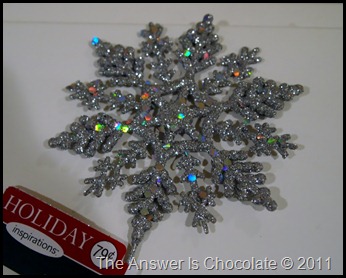 I didn’t even use glue. Just started at the bottom of the cone and stuck a straight pin through the tinsel garland and a few more as I went around the bottom to make sure it was on there good. 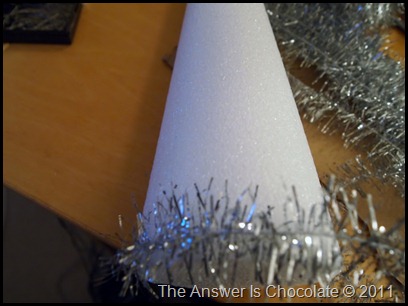 And wrap. And pin…from time to time in random places on the way up to the top.

Before I stuck my snowflake pick in, I added a glittery red pom pom I had in my stash. 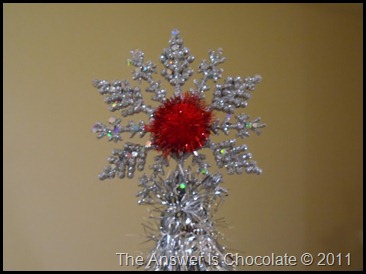 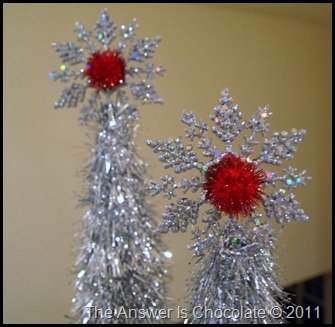 “Take me to your leader. No not the crazy woman with the glue gun. Anyone but her!”

Posted by Carol, The Answer Is Chocolate at Monday, December 05, 2011

WOW....what a fabulous idea!! You are always so generous with sharing your tutorials with us!

I have been off on another adventure so I have to catch up on what you have been doing....off to read more!

I love your crazy tinsel trees!

These are so retro and I'm glad they are so simple. My mantle is done..but it's rather simple. Maybe I'll post some pictures of it tomorrow.

Love 'em, Carol! Definitely a blast from the past, but still so fun!

LOVE!!!! I'm totally making these today...just need to get me some styrofoam cones!!!!! So awesome...

SO cute! I did the same thing with silver garland on a wreath, yet to post it but it's in the works! Love the retro-sparkly thing going on.

i don't think these are cheesy at all! i'm totally into these trees this year-i need to think of them not just as xmas trees, but as of winter items. your silver ones are perfect for that!

These are great! It reminds me of my nanna's mantle at christmas. Tinsel tinsel everywhere!!

I'm on tinsel, glitter and nostalgia overload -- in the best possible way. I love these Carol!