Hope everyone survived Black Friday. I got a few things at JoAnn and Michaels and I’m going to be a hermit today hopefully busting out a chunk of my Christmas cards!  Didn’t know what to title this post because it was one of those things I made that I had no idea what it was going to be until I did it. 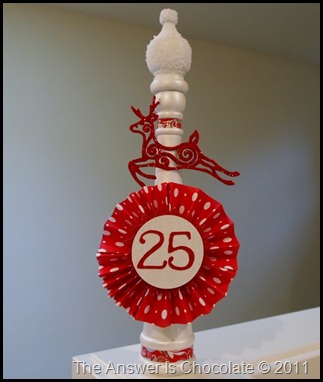 There’s an architectural salvage place in Seattle called Earthwise. I love wandering around there and finding who knows what to play with. They have a whole section of just furniture legs! 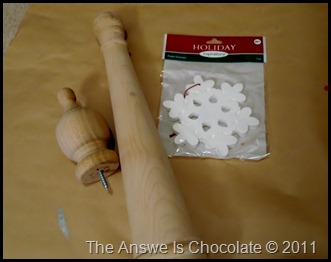 I also had a finial in my stash from a trip to Lowes. Ignore the snowflake thingy…didn’t end up using it.
I glued the finial to the leg and then painted with Martha Stewart “Wedding Cake” craft paint, followed by a coat of ivory pearl. 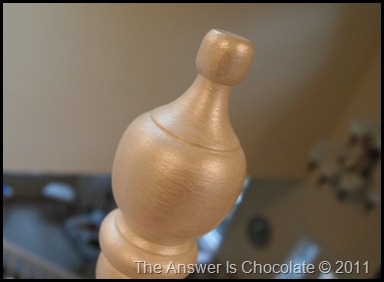 While that was drying, I made a polka dot paper medallion and cut out the numbers 25 from red glitter card stock. 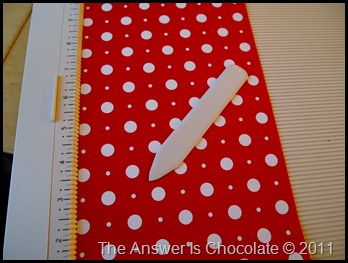 I love my Martha Score Board which I use for my cards all the time but it’s great for making accordion folds for things like medallions. 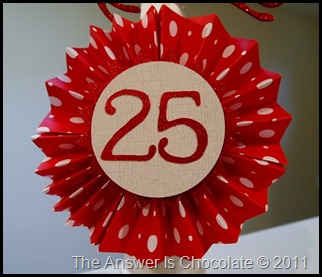 One 12x12 paper cut in half then score each 6x12 piece at one inch intervals. Fold in half to make a fan shape, and hot glue together. Repeat then glue the two halves together. Cut a circle from plain cardstock and adhere numbers. 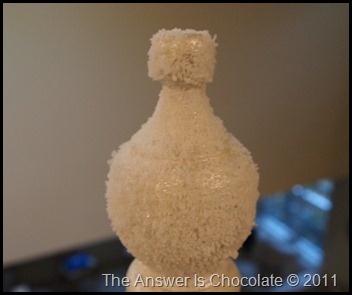 I added a little Epsom Salt frost to the top of my final. 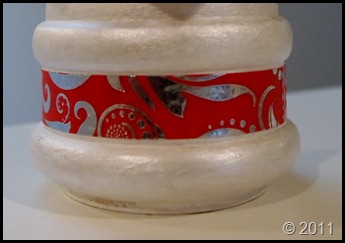 Went around the top and bottom with some patterned tissue paper. 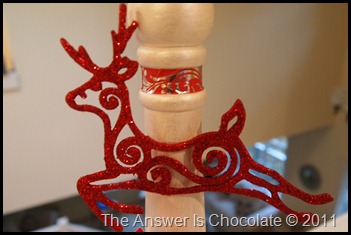 Added a glittered reindeer ornament from a pack of them I got at Dollar Tree. 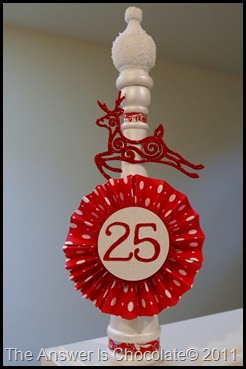 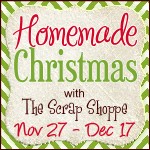 Posted by Carol, The Answer Is Chocolate at Saturday, November 26, 2011

This just makes me smile!

Very very sweet! I want to do this, very festive and original! Great job, so pretty! Thanks, Julie (letter4.com's mom)

What a fantastic idea! Love the whole thing! ;)

This caught my eye and is just the cutest thing. I loved your very detailed tutorial too and your heading is too funny. Thanks for sharing this great idea. Terry

I just became a member of your followers but you might want to delete the third one before me...check it out...I think it is spam in a new way.

I don't think this can get any cuter...great craft idea!!! I would love for you to share it at my "Anything Goes" Linky party...

Really, Epsom salt? What a great idea! The finial is fun and adorable!

It is a fabulous project!! I have that Martha score board. It makes life so much easier! =)

Love the reindeer, so cute!

This is adorable! I'd love it if you linked up and shared it at Project Queen's Christmas Craft Tutorial! Here is the link:
http://projectqueen.org/christmas-craft-tutorial-4
Mandy

North Pole! What a great idea!! I love how you made the top look all snowy. :o)


Please feel free to link up to my Make Yourself Monday Blog Hop!

Jamie
For Love of Cupcakes

This is totally adorable! Love the bling :)

So cute and love the epsom salt snow on top. Perfect!

That is awesome. I want to make one!

This post is truly inspiring. I like your post and everything you share with us is current and very informative, I want to bookmark the page so I can return here from you that you have done a fantastic job ...cubicles ft lauderdale