I May Need a Tree-tervention

Every time we get decorations out, Mr. Chocolate says: "Feel free to get rid of anything". Now why do you suppose he would say that? I don't know either. But I was really diligent with the Christmas decorations ( and guess who snuck stuff out of the Goodwill pile hmmm...his initials are Mr. Chocolate) deciding that it was time to part with some things that I hope someone else will enjoy. This almost went with the lot but it was debatable whether it was Goodwill or trash since it was truly sad looking. So of course I kept it and managed to unbend its poor twisted little branches, and so what if it tilts a little if you don't position it just the right way? It was a lonely little tree and it needed some love and the past few years it's just been shoved back in a bin. 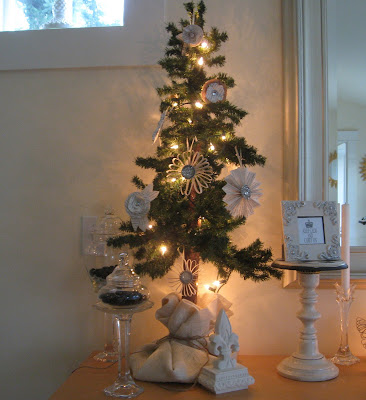 It has a hideous metal base so I wrapped it in burlap and twine which was an immediate transformation The branches are fragile so I thought what could they hold? Only a few lights and book page ornaments which don't weigh much. I didn't do a tutorial on these but there are plenty easily found .
It's sitting on my dresser with  another one of my bear victims stuck in a bowl: 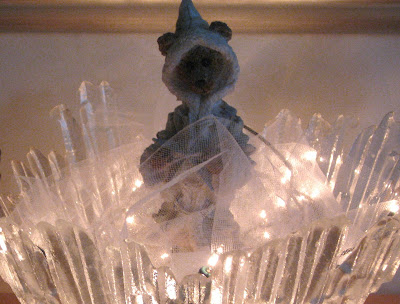 This bowl stays out all year but I added white lights and white tulle to give it wintery feel
Linking Up At: